The Do-Not's of Study Abroad 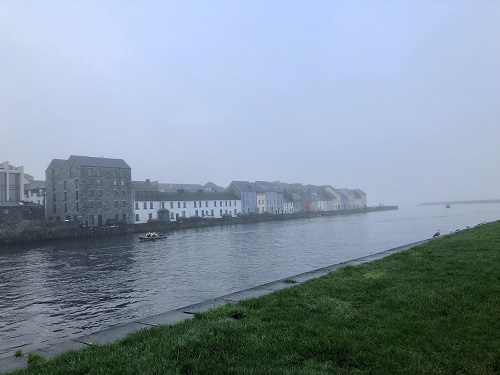 It’s been an entire year since I took flight to study abroad in Galway, Ireland, for the spring semester –– so I guess you could say I’m feeling nostalgic (and slightly homesick, due to the friends and places I’ve left behind and the memories that I now cherish). This also means that new groups of students are in the midst of beginning their journeys overseas.

I had an amazing time while abroad, and I still keep in touch with the people I met. And while I don’t have any massive regrets, I would advise those who are about to touchdown and settle into their new lives –– for the next however many months –– to consider these lessons I’ve learned. While you’ll want to do it all, there are still some things that I would advise against your doing.

1. Do not wait until later to cross off your to-do list.

Being a night owl is a part of my image. I’ve discovered this even more through my countless nights shoving out decent poems and essays at 2 a.m. I am most productive at nighttime, but getting my homework done when I wanted to was a task frequently disrupted by my decision to hangout with my friends in Ireland instead. There’s nothing I love more than socialization, and I told myself that I’d regret it if I didn’t spend time creating memories –– which is the truth, and I’m glad that I hung out with them, but I’d advise present study abroad students to prioritize their studies during the daytime when classes are still in session. I managed to get what I needed to get done done, but I was stressed whenever an impending deadline crept up behind my back –– whether that was when I was out dancing in town, or sipping tea with friends in a café.

The lesson here is to plan out your days –– to some capacity –– so that you don’t feel stressed later on. I would describe myself as someone who likes to give her all to an assignment, because I care about learning and doing well, so it’s important that I set aside time. Also, people in general are more relaxed and able to have fun when they don’t feel nagging to-do items on their minds. You’ll feel better about fleeing your apartment when that academic task is crossed off of your to-do list. Trust me. (Speaking of: buy a planner to keep yourself in check!) Plan your time accordingly, so that you can freely dive into new experiences that are bound to come your way.

2. Do not let the what-ifs weigh you down.

I gave this suggestion in a different article about solo traveling as a woman, but the same applies here. As someone who can be overly cautious, despite the spontaneity of my Sagittarius sun sign, this is a lesson that I learned while abroad: to avoid overthinking situations before they actually happen. This applies not only to major steps like solo traveling, but for daily things that you can do, like compliment a souvenir store’s cashier on her earrings, or strike conversation with an international classmate from France or Spain to learn more about them and their journeys abroad. This sentiment even works when you’re going out with some sudden friends from class at night.

Whatever the case may be, you should always consider your safety, but don’t let fear keep you from taking action. One time, when casually walking down the streets of Galway, I started talking to a woman in a random store and our conversation ended with her inviting me to a poetry reading a month from then. And while I felt nervous to read my work aloud, I can now say that I’ve presented my writing to an international audience, which is just a really great sense of accomplishment to have –– plus, I didn’t let my fear of the unknown prevent me from doing so! All in all, our worried thoughts tend to be worse than what reality gifts to us itself.

3. Do not let others define your experience for you.

Your first week or so will likely feel a little intimidating, because you’re suddenly going to be thrown into unfamiliar territory with a bunch of new faces who have their own to-do lists and goals for studying abroad. This may include photoshoots in all the fabulous cities they’ve seen on movie screens or spending every weekend in a new country. But don’t fret.

When I arrived in Ireland, I had little idea as to which countries I wanted to visit, which made me feel overwhelmed when I listened to others count off their dream destinations with one another. I knew that I wanted to travel, but I wasn’t entirely sure where to until I did my own research. While I ended up traveling with friends at times, I also decided to solo travel when others didn’t yearn to see the same places as me. Had I only danced to the beat of my fellow students’ drums, ignoring the sound of my heart, I wouldn’t have created my own experiences.

Studying abroad is a fantastic time for people to try new things and explore exciting areas, but there are some factors that you should be cautious of giving into. It’s tempting to simply go with what everyone else wants to do, but in following your own path you’ll grow more into yourself. You’ll also learn what you certainly are capable of doing and what you should do more often.

And, lastly, just a couple more pointers: say yes (!) to as many opportunities that come your way –– unless there is a serious issue or concern with it –– because you do not want to feel regret once this wonderful journey becomes a memory. Do not lose sight of the dreams that you desire.