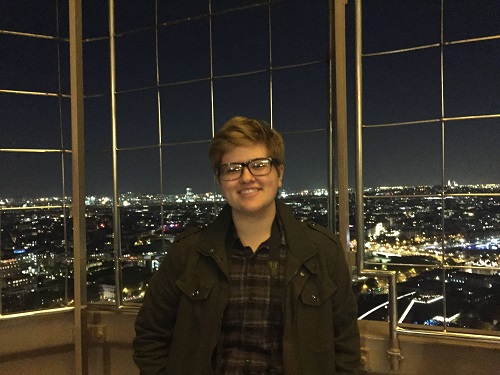 “My name is Ashton, and I’m currently a sophomore studying back in New York but abroad for this semester. I’m a transgender male as well as bisexual, something that pervades my daily life because of the society we live in but it’s also something I am proud of nonetheless. It was sort of surreal to talk about my experience and time abroad so far because it is something that still feels so unreal to me. But I do believe it is very important to reflect on life in order to progress forward in meaningful ways, so the opportunity for that was a wonderful experience.” - Ashton Riegler

Ashton shared his specific story with me and described how his identity has shaped his study abroad experience, from pre-departure to on-site.

Studying abroad and traveling was a major dream for Ashton. He had never been out of the United States and actually never even had a passport before he left for Prague. He worked hard to prepare himself for an enjoyable time. He made sure his classes would fulfill degree requirements and took a summer job to save up for expenses that would not be covered by loans during the upcoming semester. He also did some research about LGBTQ+ acceptance in Prague before committing to the program. Whether or not there was a lack of tolerance was not going to limit his options, but he needed to know what to expect before leaving.

As Ashton continued this preparation, he realized that he would have to be ready for more than he thought. He was reminded of how acceptance is not universal, and started to consider the types of threats that exist outside of his home environment. It was upsetting and hard to remember these factors, but he did not allow them to hold him back.

He made certain decisions such as opting for a single apartment, rather than having a single room within an apartment. He spoke about how he wouldn’t feel fully himself or be able to express himself while living with cis females or cis males. He wanted to ensure that he felt safe, and mitigate the chance of not being accepted for who he is. He did not see everything he did as an extra step he had to take, but just as part of his personal process. 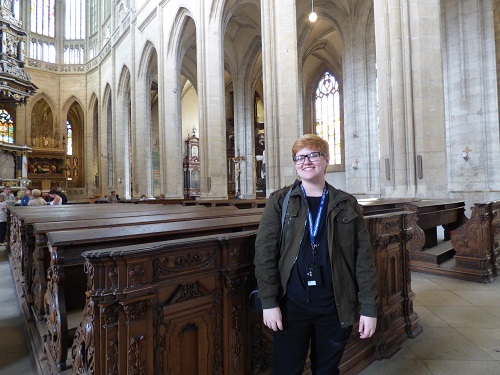 Another decision he made was to delay starting T (testosterone therapy) until after he returns home from Prague, because he understood it would be difficult to access the medication overseas. Ashton explained that he could have made it happen, but to decrease the amount of stress, he thought it would be better to wait. Waiting to begin T doesn’t allow Ashton to “go stealth,” or pass as his preferred gender, which causes a big question throughout his experience.

Many people see him as female and use the wrong pronouns, so he questions whether or not he should correct them. Some were confused when he told them his name because they did not expect the name for the person that they saw. Ashton comes from a place where he is very open and everyone knows his name and the pronouns he uses, but while being abroad he decides if it is “necessary” to correct people based on if he will interact with them more often in the future. He wants to be comfortable enough with everyone to correct them, and wants to be able to be himself wherever he goes.

To feel more comfortable whenever he travels in Europe, he continues to research the general LGTBQ+ views in the countries he plans to visit. He does not cancel his plans if he finds that there is a negative response because he understands that “it is a bonus if you find support wherever you go.” This research just allows him to prepare himself for what he may encounter. Since he was not given specific resources, he does his own search of events that are occurring in the city and even skims Wikipedia for a basic understanding. He thinks that more guidance on where to go or who to talk to in the host city would have been very helpful, but it definitely does not stop him from having a great time. 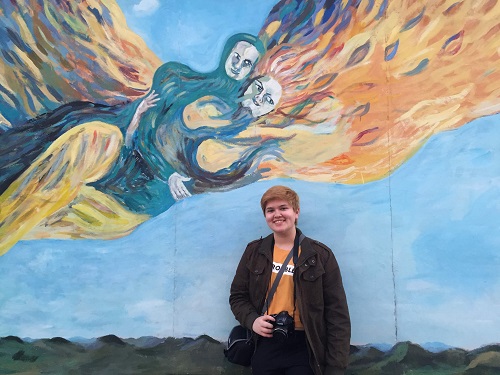 Ashton believes that everyone can have a wonderful time during their study abroad experience. The main worry for him was when and how much he should explain who he is, and he is doing a great job navigating through it all. Being abroad confirms his hopes to pursue a future career in social work to help people and share perspectives. He is also doing everything he hoped to do: travel to the cities that he'd only previously seen in photos, finally meet his online friends from around the world, and learn more about himself. When he returns home, his journey continues with T and a legal name change!