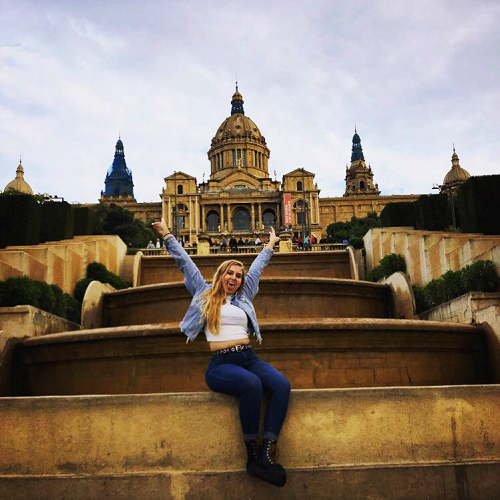 My experience through CEA Study Abroad was absolutely incredible. I decided to do two back-to-back, one-month programs during summer 2019. I spent my first month in Barcelona, Spain, and my second month in Florence, Italy.

Barcelona is now my favorite place on Earth, but when I first arrived I was terrified. I didn’t know anyone, I had never traveled on my own before, and it was a foreign country. However, my fear went away within the first week.

Barcelona is a very large city, and has a large-city atmosphere, which I loved. My 40-minute walk to school every day was one of my favorite parts; it allowed me to see the city and get familiar with the environment. One of my favorite things about Barcelona, and Europe in general, is how often people walk around. Coming from Phoenix, where it is too hot to walk anywhere in the summertime, it was amazing to be able to walk around the entire city and explore this way. Barcelona is also a very safe city, so I always felt comfortable walking places. Although pickpocketing is a very common crime, it is extremely nonviolent and if you stay conscious of your belongings, then you will be safe from it.

I had no problem meeting new people. The first night of the program, everyone went out to the bar Michael Collins to meet each other. This is where I found my group of friends who I hung out with the entire program. I came into the month not knowing anyone, but I left with lifelong friends. There is a very interesting phenomenon that happens when no one knows anyone else; you make stronger and faster friendships than you would normally. I only knew the people who I met there for a month, but by the time I left I felt as if they were the closest friends I have ever had.

While I was in Barcelona, I took Spanish class; I already had a minor in Spanish at my University in Arizona, but I wanted to more authentically learn Spanish from an actual Spanish professor. This improved my Spanish drastically, and I spoke Spanish about 90 percent of the time I was in Barcelona. Every day after class, one of my classmates and I would explore and see something new around the city each day.

When it was time for me to leave Barcelona and go to Florence, I was devastated. Most of the friends I made in Barcelona were enrolled in the two-month program, so they stayed in Barcelona while I went in Florence. I was very sad to say goodbye to them, and admittedly close-minded about going to a whole new city when I had gotten so used to my home in Barcelona. However, I am now so grateful that I chose to live in two different cities for two months instead of one.

Florence is close to a complete opposite type of city from Barcelona, so it was definitely hard to adjust at first. While Barcelona was an extremely large city that would take 1.5 hours to walk from one end to the other, it was possible to walk across Florence in 20 minutes.

While much of Barcelona's culture was centered around nightlife, the Florentine culture was centered on art. As an art major, I had such an amazing time experiencing the artistic culture in Florence. I went to countless museums, saw impressive sculptures and architecture, and got to experience the art behind food and wine. I studied art history in Florence, so I got to learn about the amazing artists whose works are displayed in that city. Seeing and experiencing these iconic artworks that I have learned about in college was amazing. The difference between these two cities made studying abroad so much more fun for me. I got to experience living in two extremely different cities in one summer, which was absolutely incredible.

Florentine food was incredible. Although there are seldom any food groups other than paninis, pizzas, and pastas, it was unbelievably delicious. Food is so much more of a focal point to European countries than to the U.S.; this was a big change for me. The U.S. often teaches you that food is nothing but nutrition, so we often eat at our desks or skip meals altogether. However, Europe is not this way. Europeans, especially in the cities where I lived, savor their meals and value meal time with their friends and family so much more.

Although I had to leave my friends that I made in Barcelona, I made new friends in Florence within the first night again. Both months, I took weekend trips around Europe to maximize my time abroad. I went to Santorini, Lucca, Valencia, Milan, Mallorca, Cinque Terre, and Paris. These weekend trips were both amazing and exhausting. I would definitely recommend traveling over the weekends.

This summer was the best summer of my life, and I am extremely thankful that I had the opportunity to go abroad, and stay another month. At the end of the first month, I was so relieved that I had another month ahead of me; I felt that one month wasn’t enough time to really soak in Europe. I would recommend it with all of my heart. You are going to spend a lot of money, probably gain some weight, and experience some pretty uncomfortable/crazy situations, but it is so worth it.

My contact info is below -- so please email me if you want more information. If you go to either of the places I traveled to, I have a list of recommendations that I can give you!

Taylor Vandenburgh is a CEA alumna who studied in both Barcelona, Spain, and Florence, Italy, during Summer 2019. She is currently a student at the University of Arizona. Contact her at: tvandenburgh@email.arizona.edu