Anastasia Kingsley: What were some goals you had for studying abroad when you came to Spain?

Marlyse: I had two goals in mind when I came to study abroad in Granada. The first goal was to improve my Spanish by immersing myself with other Spanish speakers and practicing Spanish every day. My second goal was to immerse myself in a totally different culture and also see life through the local Spanish speaker’s perspective.

AK: What factors made you decide on CEA?

Marlyse: I chose CEA because I thought it was a great program, and it also included everything for a good price. CEA had more to offer than other programs, including cultural excursions and activities, and the homestay interaction in Morocco, which I thought was the best part of that trip. Also, the CEA staff has been awesome. They have done such a wonderful job of accommodating us and making us feel supported through anything we have needed. And they were very approachable with any questions we had about the culture.

AK: Was there a specific reason why you chose Granada?

Marlyse: My study abroad advisor highly recommended Granada to me, because it’s a place where you can have an authentic Spanish experience and be able to speak Spanish in a city where the majority of the people don’t speak English, whereas Madrid and Barcelona are more so tourist destinations than Granada. And, I also felt like Granada had more to offer in terms of outdoor recreational activities, with the mountains and the beach both being so close.

AK: How do you feel that you have been exposed to the local culture during your two months here?

Marlyse: Even though two months is a short amount of time, I was still able to see how Spanish people live on a day-to-day basis. For example, my background is Mexican, so I had to change a lot of habits from Latin American culture to Spanish culture. For example, a lot of words were different here, and that proved totally outside of what I was used to.

But I was able to observe what most people consider unusual and accept it as a new norm and make it something that was daily and familiar.

AK: How has living in a homestay affected your experience with the culture, language, etc.?

Marlyse: I feel like living in a homestay has given me many benefits, because I was able to observe the way that Spaniards speak and their mannerisms, but also change and adapt my habits in a way that matches theirs. I got to try the local food, as well as ask questions about government and social life here in Spain to hear what their perspective on life is firsthand. Living in a homestay is a good window into how Spanish people think.

AK: Would you encourage other students with your major/minor to study abroad in Granada?

Marlyse: Absolutely, of course! Part of my major in Human Development is the study of human life from birth through death, and how they interact in society, but also how their ancestors have built communities through archaeological studies. Here, I’ve been able to learn about the psychology behind how Spanish people think and how their values pertain to family, which is the most important thing in Spanish culture. And I also want to go into nursing in the future, so this experience really has given me more understanding of how to treat someone from a different culture and be sensitive to those differences. 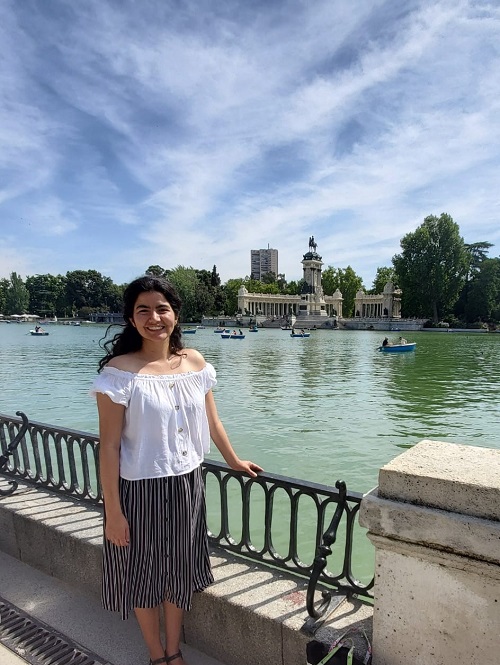 AK: How did you manage your time between your classes, social activities, and travel?

Marlyse: Using time management skills was the biggest factor in being able to balance school and other activities. I kept a planner and wrote down what I needed to do for my studies and plans and activities with friends. I made sure to get schoolwork done during the daytime before going out with friends at night. So I definitely kept the same method of time management here as I do in the States.

AK: Have there been any challenges you have faced? If so, what did you do to work through it, and once you were able to overcome it, how do you feel about it now?

Marlyse: I would say the biggest challenge has been the cultural differences between Spain and Latin American culture, because I’m Mexican. Mexicans are very open and friendly toward people on the street, whereas Spaniards are more reserved. But the vocabulary is also different, so I made sure to ask my host mom to ensure when I spoke to people, I wouldn’t offend them in any way.

I made sure to always ask questions to overcome those cultural differences.

I also did a lot of research before coming to Granada to prepare myself for what was to come.

AK: What recommendations do you have for developing good relationships with your fellow students and professors?

Marlyse: If you are struggling in keeping up with the language or the material, I highly recommend that students form study groups; it’s a great way to make friends. Also, don’t be afraid to ask the professor questions. The professors are so friendly, helpful, and understanding. Coming into another culture is not easy, but these professors are very culturally aware that we are American students coming to Spain.

AK: Has there been anything that has stood out to you from any of your classes, or a favorite class?

Marlyse: I think my favorite class was History of Spain, because in high school, we covered Franco and the dictatorship, but very minimally, so I didn’t understand very much of it then. But coming here and being able to take this class in Spain -- and also understand how Spain came to be -- definitely helped me understand the economy as well as the social and political aspects of Spain then and now.

AK: What are one or two important lessons or takeaways you have learned during your time here?

Marlyse: I think the most important thing is to appreciate life from different perspectives. Education is the most valuable tool we can use to change the world, because right now there are so many discrepancies in our social and political systems in the States where so many people are not understanding each other.

So it’s important that we talk to people who are different from us to understand where they are coming from; that will help us embrace change and different ways of living. And, it’s important to become aware of other people because the world is becoming so much more diverse.

When you put yourself in unfamiliar situations, you become friends with people who are in the same boat, and that brings you closer together because you have shared experiences. Those have been the biggest things for me that I’ve learned here.

Marlyse’s favorite local foods are gazpacho and salmorejo, and she hopes to travel next to the Netherlands and Argentina. After she graduates in Spring 2020, she will pursue her dream of becoming a nurse.