How I Adjusted to a Foreign School System: New York to Galway 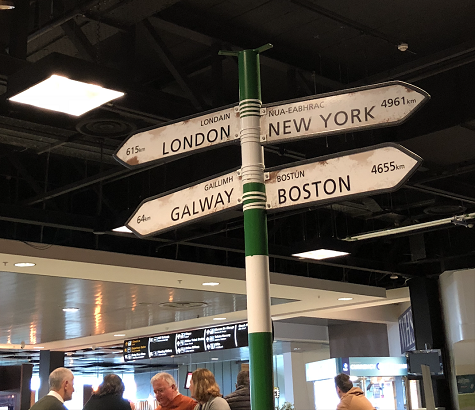 Super Bowl Sunday happened just two weeks ago, but this year I wasn’t in my usual environment. This is because my grand kickoff into Ireland has continued to touch down into greatness; however, I refuse to lie and say that anxious feelings have not at all intercepted my acclimation process, including ones that were due to unfamiliar teaching styles and a lack of full-on classroom discussion about literature.

Stepping Outside the Comfort Zone

To tell a story: before a concert one night, a local jokingly asked me why I chose to come to Ireland instead of England for my English degree. I explained to this person that I stem from Irish roots and that I wish to learn more about the literature here, and to also possibly find inspiration to write more in such a vibrant and calming place (though I said this in a more casual manner). He then proceeded to make a couple more jokes, which I pretended not to take personally, but these comments and my own sprouting concerns admittedly did have an effect on me for a couple weeks thereafter.

One of the things that first bothered me when classes began is that many of my English courses were lectures instead of seminars; this means that it is usual for the professor to talk about a subject or book for an hour, rather than the class engaging in literary conversation. At New Paltz, my English professors tend to briefly introduce a lesson, then spend the remainder of the time communicating with us. This is what I love about my home college, a reminder that played a role in how I initially reviewed my classes here. I even texted my cousin about how I felt one night, then uncontrollably sobbed when Laura responded with: “So, it’s an ending too, not just the teaching. It’s a lot of emotion.” This is because I only have one semester left at New Paltz in the fall, with one writing craft course and a few Journalism courses to take before I graduate.

I choose to share these moments of doubt, because they display the truth of how I had felt -- and while my feelings initially overwhelmed me, I ultimately did not let them tackle me. I reminded myself that I once felt outside my comfort zone at my home college, and that every place is unfamiliar until one day it is home. This is how I feel about New Paltz, and this is how I am beginning to feel about Galway. 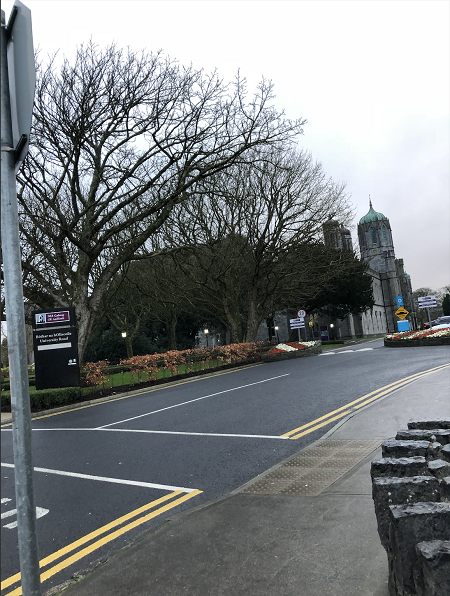 The main entrance view of NUI Galway, with the quadrangle in the back, one of the most notable and picturesque places on campus.

At NUI Galway, visiting students are granted the first few weeks of the semester to test out courses and see which ones they would like to take, and to also wait for approval from their advisors. I began this semester enrolled in almost eight courses, most being lectures, which have since turned into a solid four. However, this was not a simple transition. I spent a few days of my first week sitting through lectures from 9 a.m. to 6 p.m., because I wanted to see what was available to me. I didn’t want to miss anything and regret it later.

At this time I had neither received my English seminar placement, nor my acceptance into the “Indigenous Arts Exploration” course, so I was pretty much clueless as to what I wanted to take for the next three months––as I may now assume a couple hundred other students were as well. This uncertainty barricaded my open mindset, threw me into a whirlwind of “what-ifs” and regret-ridden concerns, and made me feel as though I was the only one struggling with a final course selection. While this may not seem that great a deal, I hold my love for writing and learning close to my soul, and I didn’t want to feel stuck in this unanticipated negative mindset. This sense of doubt was nowhere to be found in my orientation booklet, and I didn’t have much room in my planner, either. 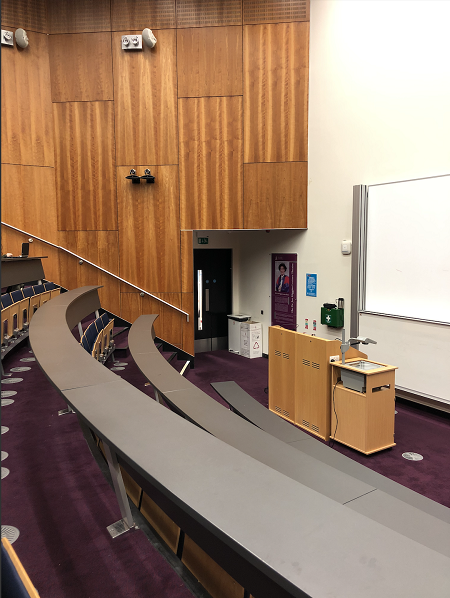 My usual view of my lecture “Nineteenth Century Gothic Fiction”; it is rare that you'll ever find me sitting farther back than this row!

I realized that I would eventually have to come to a solution, which I did, but not without contemplation. I am now taking a seminar on contemporary Irish literature, in addition to a smaller lecture-style course on King Arthur and the Holy Grail, taught by a professor who could also be defined as an engrossing and enthusiastic storyteller. I was accepted into the “Indigenous Arts Exploration” course, which will educate me more on traditional Irish literature, dance, folklore and more, and I am taking a lecture on Gothic fiction, which features tidbits of history from the nineteenth century, in conjunction with texts that were both original and unusual to the period.

I should also mention that I'm not entirely sure how I feel yet about the final assessment here, but for my four English courses I will be evaluated based on just one or two assignments, instead of several throughout the semester. This is both relieving and concerning, as it gives me more time to explore Europe, the people and myself, but it leaves me with not nearly as many opportunities to earn a high grade. Regardless, I will remain engaged in my courses and work to manage my time between social life, exercise and academics (I think that just about every college student can relate to this constant struggle). 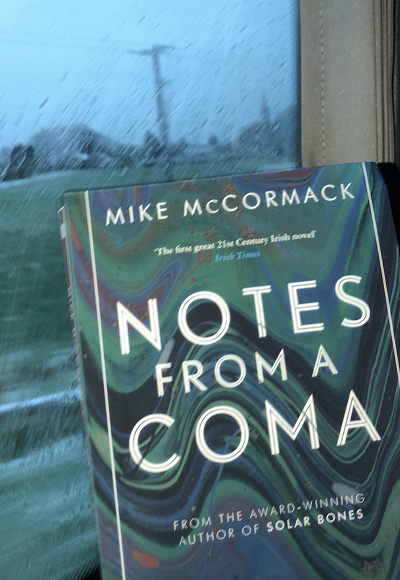 The first book I read for my class, Contemporary Irish Literature, a two-hour seminar during which literary discussion flourishes!

Making the City My Classroom

In just one month, I have already learned so much inside and outside of the classroom. This knowledge includes my visits to museums on Irish history and art, being educated about different Irish terms, which range from the significance of a “J1” (which is basically a paid summer internship in the United States for Irish students) all the way to a crash course on the financial collapse dubbed the “Celtic Tiger,” delivered by my warm-natured classmates.

I used to believe that what is written on the syllabus matters most, that those learning outcomes define what we will come to know. But since I moved to Ireland, I have begun to realize that not everything worth knowing starts out written in ink. There are memories to be had and moments to learn from, and not all fall within the traditional classroom setting, which is perfectly okay. 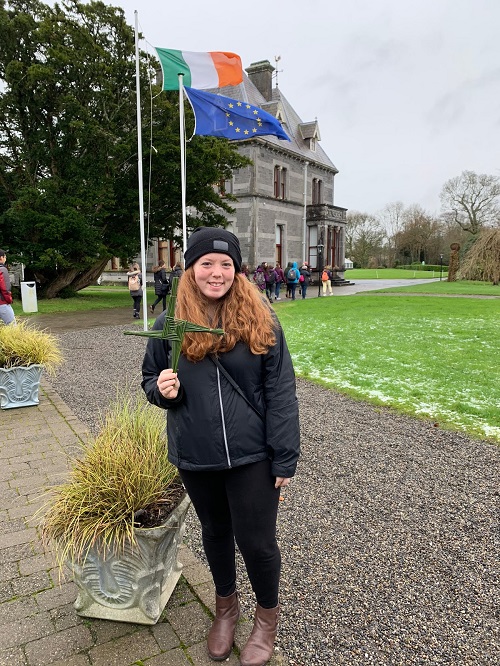 This picture was taken at the National Museum of Ireland - County Life in County Mayo. Through my course, “Indigenous Arts Exploration,” I was able to make a St. Brigid’s cross (woven with rushes) on Jan. 31, which we were told is the exact day in the Irish tradition when these were made. This ritual would then involve the placement of these in areas like windows and doors to protect loved ones from harm.


While I, of course, do continue to care about the content in my classes, one of the greatest lessons I will come away with is that the study abroad program in Galway experience is not simply centered around the obvious answer of one’s studies. The challenges that originally seem intolerable are eventually revealed to be learning outcomes on the syllabi of our lives. It’s okay to let your mind run around in circles, or even faceplant into the mud, as this could help you to recognize concerns that you may have. However, you will eventually realize that all your experiences—the good, the bad, the confusing—are only temporary. In this life, you'll come across new things and moments to reflect on, and this eventual recognition, my friend, is a year-long celebration for you, all in itself. Sometimes our difficult endings are also actually the beginnings of something special. This is a fact of life that I’ve come to learn, and I hope that you will, too, if you haven’t already. I’m sure that you will. 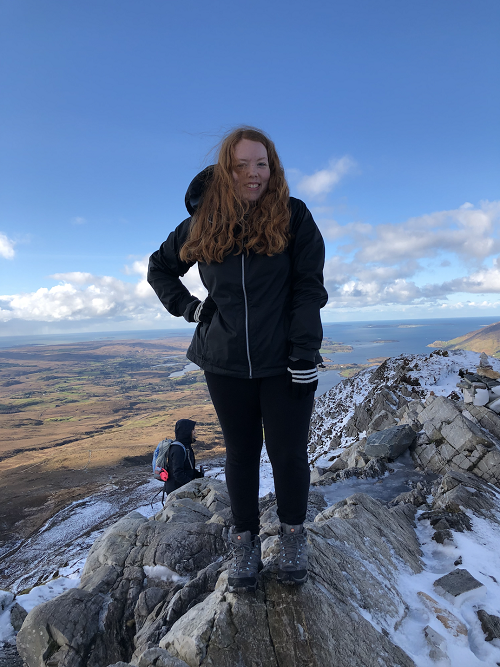 This picture was taken at the top of Diamond Hill in Connemara National Park in Letterfrack, County Galway. At times, life is messy, but with strength and determination we possess the power to find goodness in our struggles.
Kelsey Fredricks is the Spring 2019 CEA MOJO Blogger in Galway, Ireland, and is currently studying at State University of New York at New Paltz.
Leave a comment
Newest on top Oldest on top
Load more comments
Thank you for the comment! Your comment must be approved first