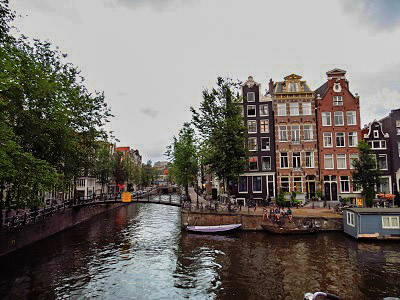 It’s hard not to fall in love with Amsterdam and the Dutch! I first visited Amsterdam in 2000 as a tourist, and I immediately knew I wanted to live there someday. However, it wouldn’t be until 2005 that I was able to return as a student, and truly immerse myself in the wonderful culture and vibe that this amazing city has to offer. Even though it had been five years since my first visit, the city had an air of familiarity as soon as I set foot out of Amsterdam Centraal train station.

The city is incredibly easy to navigate on foot, by public transport, on a bike, or by boat. Almost everyone in the city speaks some level of English, so even though I did not know any Dutch, I was able to communicate easily as I explored the historic streets every day. Amsterdam is a city purposefully designed for the urban explorer. Most residents choose to bike around the 475 miles of bike paths and lanes across the city, and traffic lights have their own designated signals for bikers.

In addition to ease of navigation, one thing that I truly admire about the Dutch is their pragmatic approach to life. They are a direct people, but not in a rude or dismissive way. They just state things factually, and have a practical approach. This bleeds into big and small things, from city policies around things we in the U.S. still grapple with as taboo, to everyday things like grocery shopping. A favorite anecdote I experienced that truly embodies the pragmatic Dutch approach is when a friend invited me over to her house for tea. Unlike Americans going to Starbucks and getting a humongous cup, or the British with their high tea traditions, my friend boiled some water, poured it into moderately sized mugs, then proceeded to dunk a tea bag in her cup about 5-6 times, then passed it to me to do the same. Giving me my own tea bag would have been wasteful and indulgent. That is quintessentially Dutch!

Living and studying abroad in Amsterdam, there was no shortage of interesting things to do on a daily basis. Of course there were the incredible museums, the World War II monuments, Anne Frank House, the palaces, and the fascinating architecture to explore daily. There is also the food, which is an amalgamation of different cultural traditions acquired by the Dutch when they were a naval superpower. One can explore the culinary delights of Indonesian, South African, Thai, Middle Eastern, as well as a plethora of European fare. And, of course, one has not truly visited Amsterdam without stopping by a French Fries stand; served in a paper cone, with mayonnaise on top!

It is difficult to pinpoint just one favorite thing to do in Amsterdam. However, if I have to choose, it would be enjoying a beer with friends on the sidewalk with everyone after work or school, and just people-watching. The Dutch gather at the bar, and the sidewalks are peppered with high tables for the bar patrons, everyone chatting, laughing, and being among friends. Watching that, and being in the middle of it, even when I didn’t speak the language, is probably my favorite memory of this incredible city.