I decided I wanted to study abroad before I even decided where I wanted to go to college. The where was the hard part to figure out, because there are so many options to choose from. I narrowed my choices down to Spanish-speaking countries with the declaration of my Foreign Language minor, and CEA’s Early start program in Buenos Aires, Argentina which would allow me to take two Spanish courses in a Spanish-speaking country cemented my decision. 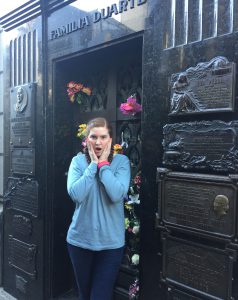 However, my immense desire to immerse myself in a foreign culture didn’t completely mitigate the fear of being surrounded by completely foreign things. At the end of the day there’s only so much you can prepare for. I studied the language as much as I could before arriving. I brought lots of lactose pills and tums in case the food didn’t agree with me. I brought five power adaptors, three of one style, two of another just in case any of them didn’t work.

But there are so many things I couldn’t have prepared for. For example, time isn’t treated the same way here. I’m used to living by the mantra “if you’re not five minutes early, you’re late.” In Argentina, being five minutes early is like being 25 minutes early. And time isn’t just more lax in terms of time of day, but in scheduling too. Fútbol tickets might not be released until a week before the match, and you might not get a schedule to volunteer until five days before they want you to volunteer. I’ve had to become more patient to adapt to this difference in ideology. 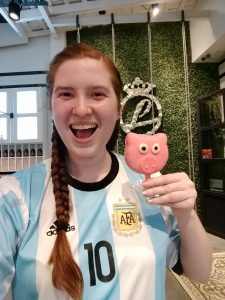 The meal schedule is also drastically different in Buenos Aires. Breakfast is similar: between 7 and 10 a.m. more or less. Lunch is slightly later, closer to 1 p.m. than noon and dinner is not until 8:30 p.m. at the earliest. Dinner is my main meal in the States, so I had to adjust my eating habits considerably.

Navigating the city also required some adjustment from me. Buenos Aires is huge, and parts of it are organized in a grid, but then the grid will be disrupted by parks and plazas. I loved visiting the parks and plazas and seeing the green space inside the city, but there have been a couple times when I’ve tried to cross through a plaza and ended up on a different street than when I entered and walked about an hour in the wrong direction. As I was still adjusting to the city, I was afraid to take the buses because if I could get so lost walking, buses would surely just magnify the scale of my disorientation. I’m a lot more confident and comfortable now, though I still take wrong turns from time to time.

Ultimately though, I’ve faced all these differences and challenges heads on, adapted to the cultural differences and powered through my fears. I’ve learned to be more flexible with time, and I’ve explored the city, talked to people in Spanish, tried new foods, and visited parts of the country outside the city. There will always be hesitations and obstacles, but they’re not stopping me from thriving.


Quinn K. is the Fall '17 CEA MOJO Blogger in Buenos Aires, Argentina. She is currently a Junior studying Professional Writing at Champlain College.
Read more about our CEA Content Creators.
Leave a comment
Newest on top Oldest on top
Load more comments
Thank you for the comment! Your comment must be approved first