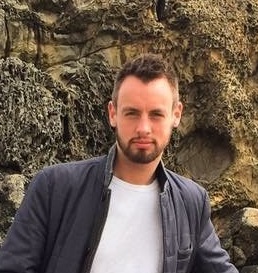 Yoann earned a Bachelor’s degree in English, a Master’s degree in French, and studied abroad in Arkansas, Wisconsin, and West Virginia. He is originally from Lille, in Northern France, and is a CEA Housing Advisor and French faculty in Paris.

…what I like is that there are things to do all the time. You’re never bored. Sometimes it’s overwhelming, because it’s Saturday, and you’re like, oh what can we do, and there are so many options. ..whatever you like, there’s something to do. That’s what I really like about Paris.

[Also,] if you want to visit [other] places from Paris, it’s very easy.

What is something that students typically don’t know about Paris when they arrive?

What should every student know before they go to Paris?

Be ready to walk a lot, first of all. We walk everywhere.

What is something about French culture that students should really know?

The way we behave and the way we interact with people. American people are known to smile at everybody and they’re always like, “how are you?” And we tend to be more closed, I guess. It’s not that we are mean, it’s just the way we behave. Culturally you’re going to have to behave differently, so be ready to shift the way you behave.

What appears to be the most challenging thing for students in terms of adaptation, and how do they overcome it?

They think they are going to be able to meet a lot of [French] people and sometimes that’s the struggle. So I guess they have to find the way and they have to really go outside of their comfort zone…to meet people if they want to practice their French and speak French.

I just talked to a student who met a French student during her semester in Paris and they became best friends. [After her program] she stayed with the friend and her family for a month.

Where can students go to meet locals?

It’s at [language exchange] events. IN Paris, thereare a lot of social events organized at different cafes and they organize language [exchange events]. It’s very casual…and they meet there and they can practice whatever language they want to practice.

What is your favorite thing to do in Paris?

I try to discover the unknown Paris - so all the different parts of the city. Recently I’ve tried to discover unknown or different, off the beaten path [places]. All the districts are so different.

And in the summer, because it’s so nice, what I like to do is enjoy the parks. Because we have amazing parks. I live right by the Bois de Vincennes, which is on the east side of Paris. And it’s a huge park and wood, and when you are there you feel like you are so far away from the city. Kind of like Central Park.