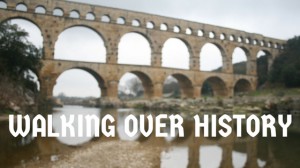 “We are not makers of history. We are made by history.” – Martin Luther King

The air, the grass, the trees, they were all normal but there was something about that place that was not. A chilling thought lingered over the area, it was a concentration camp. Around one hundred thousand were brutally killed on that ground.


In school, history was my favorite subject. Stories of epic battles, ancient empires and the development of humanity entranced me. This passion for history, in fact, was one of my reasons for studying abroad in Europe, which I knew had its fair share of castles and historic landmarks. Now, two months in, I can say that it has far exceeded my expectations. Walking over history in places like the medieval walled city of Avignon or a 2000 year old Roman aqueduct snatches events and historical figures out of a textbook and onto the ground where one is walking … or skiing.

The cold mountain air hit my face as the ski lift flew above the slopes below, as I looked around at the beautiful French Alps a few old buildings caught my gaze. As the lift carried us to greater and greater views I continued to wonder why so many strongholds had been built onto the mountain face until I realized, they are Nazi war bunkers. People were nonchalantly skiing around mountains littered with large war bunkers, a sight I would never expect to see in America.

Unlike America, in Europe every corner has a story. My hometown of Antibes was begun by Phoenicians then occupied and developed by the Romans before it became a fortified town during the Middle Ages. Remnants of each inhabitant exists across the city affecting the appearance of some of the streets and buildings. In the 20th century Picasso painted here and now has a museum to commemorate it. History certainly affects the appearance of things, the organization of daily life and the culture much more than the States.

The concentration camp was a chilling experience. As I left the camp and walked by a normal, modern residential town on my way back to Berlin I wondered how humanity could perpetrate so much evil. How chilling, I thought, to live next to such an evil spot and to have that as ones relatively recent history. After visiting the camp, I visited the site of the SS headquarters, now thanks to Allied bombing, a pile of rubble. From the site of the victim’s deaths, to the site of the perpetrators planning, to modern Berlin, I realized how much history has affected that place. Reminders of a time not long past. Martin Luther King was right, we are made of history, we can make up for past faults and forgive others for past offenses but we can never truly escape history’s impact, walking over it has made me realize that.