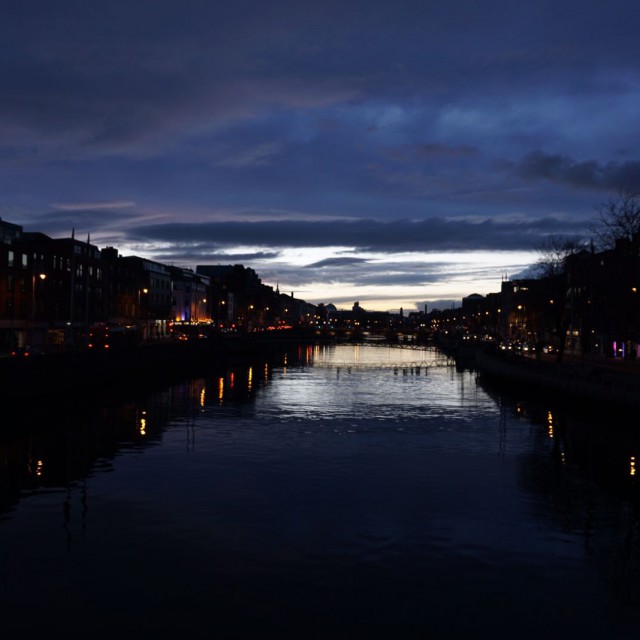 My journey has officially begun! I was lucky enough to sleep nearly the entire way on the plane ride to London and then again from London to Dublin, giving me the energy to begin explore this beautiful city with only a slight neck cramp.

I got to experience the classic arrival in the terminal with a man holding a sign that was picking me me up. I met another student, Mycayla, that is in the same study abroad program in Dublin as I am and we instantly became friends. We were taken to our university and we agreed that we only needed 15 minutes to set our stuff down because we were extremely excited to get into the city.


We needed to go shopping for necessary items we didn't take along like shampoo, bed sheets, hangers and such. But that wasn't our first stop. I wanted to order my first Guinness. The day before I left to come to Ireland my friends threw a going away party for me. They purchased a few cases of Guinness, so I had a fresh taste in my memory to compare this creamy nectar to. I didn't understand why everyone who has had a pint poured in Ireland said it was so different, but boy are they right.

We asked a local lady what should be our first pub that has the best Guinness and she pointed us down a street with some vague instructions. On our way, a man was in the middle of the sidewalk trying to talk to people. We stopped and listened and in return he told us which pub we should go to for our first meal. He told us to go to O'Neils and gave us clear instructions on how to get there. I ordered a delicious Guinness with Irish beef and Guinness Stew for a traditional Irish meal and it was fantastic.

The next day, we were giving two other American girls' contact information that are in the same program, Ashlen and Shannon, who also became instant friends. We explored the town and went on a tour of the city. Phoenix Park, which was breathtaking. The entire city was not how I expected it to be. As an ignorant American, I imagined people traditional old clothes, street performers playing harps and lyres, only cobblestone roads, and the structures of buildings to not be familiar looking. Only certain parts of the city have the cobblestone, the buildings are quite old with a low-lying skyline, and everyone is wearing similar clothes to what I wear. Though joggers are a huge thing here and are extremely cheap (and comfy!).
I already know that I am going to love this city and have countless stories and adventures to share when I get back home.


Cheers,
Sylas S. is the Spring 2017 MOJO Blogger in Dublin, Ireland. He is currently a senior studying Mechanical Engineering at University of Wisconsin-Platteville.