The City is My Classroom 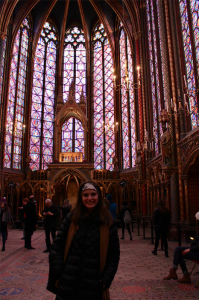 I love that education systems vary around the world, they show what the culture values. From my two week worth of experience of the classes here in Paris, I am learning that the French value experiences and context. Of course, this might not be universal in all of France, but this is simply what I have observed.

The French value experiences because they believe that actions are educational. For example, if a child falls down on the street here in Paris, oftentimes the parents will (lovingly) let their child stand up on their own versus jumping straight to their aid. They know this is valuable so they teach that from a young age. One of my classes here at CEA Paris is History of Paris: An Architectural Perspective and my professor knows how important it is to have readings and lectures, but also how vital it is to walk around the city and actually experience the architecture of Paris. And I can assure you, I learned more during an hour and a half of seeing buildings of Antic Paris than all of the reading and class time on the subject combined.

They believe in context because history is important to culture, in fact, history is what forms a culture. Another class that I am taking is Haute Couture: A History of Style & Fashion and as we study the styles of the eighteenth century, we see how  history impacts the clothing. For example, during the years of the French revolution, clothing became more casual not just because they made lives simpler, but more so in protest to the monarchy, which had always promoted aristocratic clothing. Yes, the French view fashion as self-expression but also a statement for their culture. They wear or do something for a reason, not "just because."

Looking at the education system of the United States from an outside perspective, I have discovered how greatly our country values individualism. In some cases, this can be good because it pushes us towards advancement, however, I think it's easier for people to get trampled in the American society because we are often too focused on ourselves. I am so grateful to step out of my normal world for a season to gain a new perspective on life and the various ways to live.