Academic Life at University of Westminster 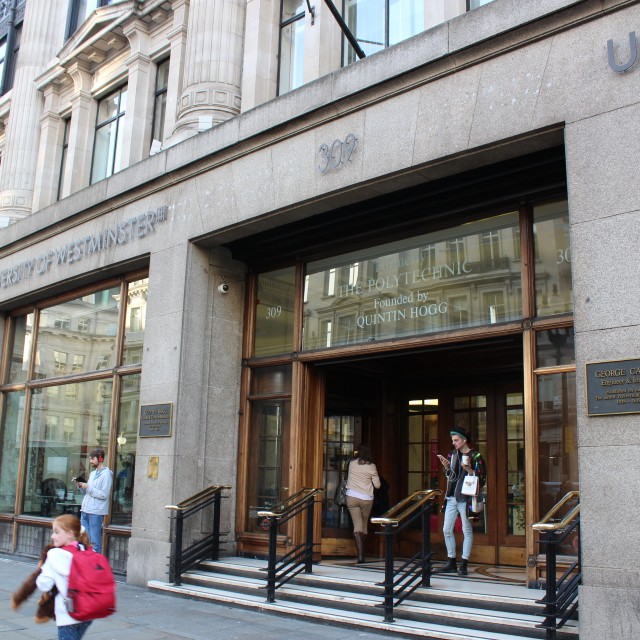 Since I've passed the midway point of the semester, I thought I'd share my experience with the academics here at Westminster. Although I'm a Management student at my home institution, I decided to take a variety of different classes in different subjects, such as sociology, literature, and writing while abroad. This has allowed me to interact with students of many different backgrounds, and broaden my perspective of academic life in the UK.

The biggest difference I've noticed is the structure and scheduling of classes. At my home institution in America, each class  would meet several times per week, at different times per week. For example, I might have one class that meets Tuesdays and Thursdays for an hour and fifteen minutes, and another that meets Mondays, Wednesdays and Fridays for 50 minutes. The classroom sizes are usually about 20-30 people, and the students are able to directly communicate with the Professor and ask questions.

My experience at Westminster differs from this, in that each class, or "module," only meets one day a week. However, depending on the type of module, they are often split into multiple parts, sometimes even with different teachers and rooms. Take for example, one of my classes: Global Business Environment. This module starts off with a large lecture containing all the students enrolled; in which we are given a presentation of that week's learning material. Afterwards, we head to separate workshops, which are slightly smaller and allow students to ask questions and work on more material. The final section of the class is the seminar, which is even smaller than the workshops. It is here where we work in small groups on our projects and presentations.

The general philosophy of learning is also fundimentally different here in the UK. The classes are based around an independent learning model, and put much of the responsibility in the student's hands. Students are expected to have finished their readings by the start of that week's class, so that they can discuss the concepts with their classmates and ask questions if needed. Professors also don't usually have office hours, so it's important to attend class if you need help.

Their grading system is also affected by this independent style of learning. In America, we're accustomed to doing homework, taking quizzes and tests, and completing assignments that count towards our final grades. The UK takes a more hands-off approach, and expects the students to take the learning process in their own hands. Homework doesn't usually exist except for the assigned readings; and the students are only assessed through bigger projects such as tests, essays, presentations, or reports. Many American students I've talked to agree that this system is a bit worrying, as it doesn't give consistent feedback and puts a large emphasis on the essays or tests. What's also a bit concerting is the actual grading scale-according to my professors, a 75 is a "perfect mark," so I shouldn't be worried when I receive a 67 on a project. This aspect makes the least sense to me, but apparently it's a popular method in Europe, so they must be doing something right.


James L. is the Fall 2016 CEA MOJO in London, England. He is currently a senior studying Business Management at West Chester University of Pennsylvania
James Longenderfer is the Fall 2016 CEA MOJO Blogger in London, England, and is currently studying at West Chester University of Pennsylvania.
Leave a comment
Newest on top Oldest on top
Load more comments
Thank you for the comment! Your comment must be approved first