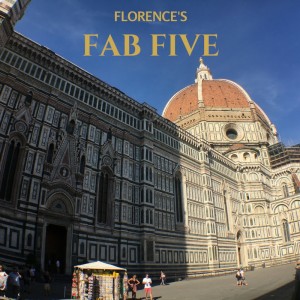 A beautiful body perishes, but a work of art dies not.

Of the thousands of important and influential people that have touched the streets of Florence, five men have made their way to the worlds most recognizable names in history. 500 plus years later, these men are still relevant today for their eccentric ways, their art and their ideas.


One of the most important figures in Florentine history. Without Brunelleschi, Florence would not have the same jaw-dropping atmosphere it has today. While the Duomo (Cathedral of Santa Maria del Fiore) was being built, no one could figure out how to build the Dome without caving in, creating a physical and economic disaster. So Fillippo and his friend Donatello traveled to Rome to study the ancient architecture. After returning, Brunelleschi figured out the only way to keep the dome from crashing down. In 1420, the dome began construction of the dome and finished only 16 years later, an architectural miracle. It was the first octagonal dome in history. The way he strategically placed each brick hundreds of feet above the ground was mysteriously breathtaking. The dome itself stunning at almost 400 feet tall, now imagine building that in the 1400s.


Donatello, besides being a famous Ninja Turtle, lived in Florence through the early 1400s as a sculptor. He was influential in many ways to the history of Florence but there was one thing that helped him become a great. Donatello was the first person to sculpt the David, which is now one of the most famous sculptures in the world. His David however, was made from bronze and looked a bit different from the one everyone is used to. Donatello's David was one of the first free standing nude sculptures that revolutionized the art world.


Michelangelo, considered one of the greatest artists in the history of the of the world, grew up and lived in Florence most of his life. Known for his astonishing masterpiece on the Sistine Chapel ceiling in Rome and many more pieces of art and sculpture, Michelangelo also hand-crafted one of the most iconic sculptures up to modern times. Inspired by Donatello's first David, 16 year-old Michelangelo created the marble version that is known around the world. This 20-foot sculpture was and is the symbol of Florence. Michelangelo is buried at the Santa Croce church located five minutes from the Duomo.


Famously known for his paintings of The Last Supper and the Mona Lisa, da Vinci lived in Florence, painting and studying the anatomy of humans. He was 23 years old when Michelangelo was born and soon, they would be come intense artistic rivals during the Renaissance. At an early age in Florence, Da Vince studied artistic craft through Donatello's contemporaries, making masterpieces such as, The Baptism of Christ and yet another bronze David. Before leaving Florence, Da Vinci was able to study and disect human beings and draw detailed pictures of their structure. This was frowned upon in his society, yet it helped revolutionize the science world.


Galileo may have had a short stint in Florence, but it was a stepping stone to bigger things. Galileo was leading a scientific revolution during the 17th century. Galileo came to Florence to study and teach mathematics, yet he discovered something much more than that. During his stay in Florence, Galileo, through his telescope, discovered other planets revolve around the sun, not Earth. This supported the Copernicus Theory, but back then, the Church's view was the only right answer. The Church tortured and banished Galileo for opposing their views, but ironically Galileo is now buried inside Sante Croce right next to Michelangelo.

It is important to know who these men are, because it makes studying abroad in Florence even more interesting. Being able to walk where these five incredible figures of Earth's history had once worked and studied is a humbling feeling. Not everyone can say, "I walked in the footsteps of some of the influential and some of the smartest people in history.

Patrick Casey is the Fall 2016 CEA MOJO in Florence, Italy. He is currently a junior studying Communications at Sacramento State University.

Patrick Casey is the Fall 2016 CEA MOJO Blogger in Florence, Italy, and is currently studying at California State University, Sacramento.
Leave a comment
Newest on top Oldest on top
Load more comments
Thank you for the comment! Your comment must be approved first