A Tale of Two Languages 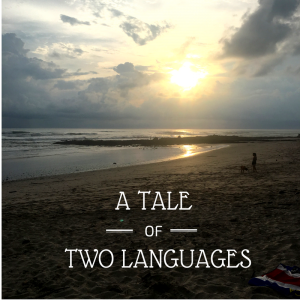 Learning a new language isn’t something that happens overnight. I have been studying Spanish for years now and I still learn new words and phrases every day. No matter what language you want to learn, I wish to provide you with some motivation, through my stories of small gains and (plenty of) miscommunications along the way.

When I first joined a gym in Costa Rica, one of the first things I realized was there was this guy walking around watching everyone. As anyone would, I stared at him and wondered what his deal was. Throughout my first interaction with him, I looked (and felt) like a lost puppy. Words flew in one ear and out the other as I tried to keep up with his Spanish. Eventually, it got so debauched I had to point to a machine and scurry off to avoid more awkward conversation.

I redeemed myself the following weeks by talking to another trainer, who is younger and talks slower. Long story short, I talk with him in Spanish whenever I go to the gym and learn a new word or phrase just about every time. Lesson number one: stay with it!

When I walked into the barbershop, I couldn’t even understand the first thing they asked me. So when I sat down to get my haircut, I had no idea what to expect. The barber could tell I was from the United States and asked me the usual small talk questions. About two or three minutes into the haircut, I won an inner battle and opened up, mustering up all the Spanish I had inside my head.  Throughout the rest of the haircut, I spoke with fluidity and felt very proud of the fact that I could hold a simple conversation. Lesson number two: Don’t hold back!

Take advantage of your opportunities

Studying abroad has made me realize I am truly in the center of another culture. It's a strange concept to consider, but I embrace the change and so far, have used it to my advantage.

The Spanish language surrounds me wherever I go. My thoughts about this – take every opportunity you have to learn. When I don't understand a word, I ask.  If I see a peculiar sign, I put it in my notes and look up the word later. Talk to locals! If someone is speaking too fast, simply ask them to slow down. Lesson number three: take advantage of your time abroad, because you may not have an opportunity like this ever again.

Don't let the fear of not knowing another language stop you from going abroad.  It has expanded my horizons and I am happy to live in a country who's language is different than my own.