A Royal Excursion to Windsor Castle 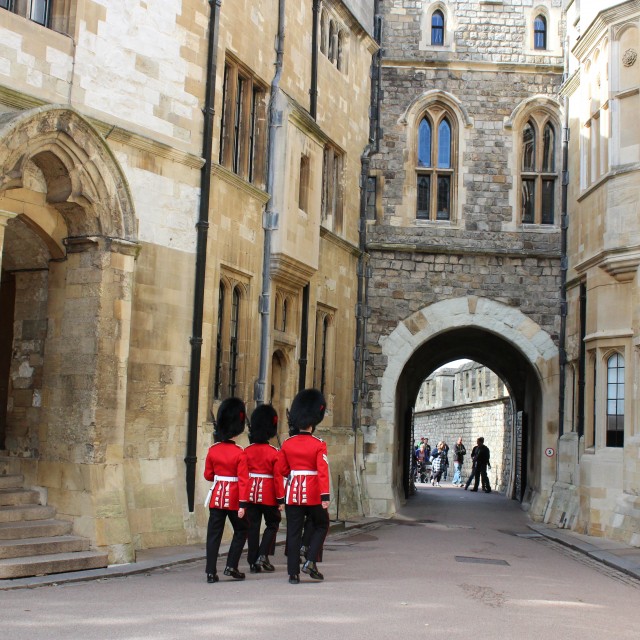 After a few weeks of getting acquainted with the city, the CEA London family hopped on a train for Windsor. Windsor is a town just west of London, and is home to the famous Windsor Castle. Sitting up high on a hill overlooking the town, it was the first thing we saw after getting off the train. Known for its elaborate architecture and ornate interior design, this castle has been in use by English monarchs for nearly a millennium. It was built in the 11th century by William the Conqueror, after the Norman invasion of England. Since then, each successive monarch has renovated and added new developments to the castle, yielding one of the most expensive building projects in English history.

Since it is still in use today, there are only a few areas that are open to the public, my favourite being the State Apartments. It is in these rooms where the past Kings and Queens lived, so unsurprisingly they are ridiculously extravagant. The rooms are filled with priceless art, furnishings and trophies; the walls and ceilings decorated with ornate moulding. It was truly incredible how over-the-top it was. Each room had a specific purpose; the King alone had a bedroom, a dressing room, and room that served as his closet. All of which, of course, were fairly large with high ceilings. There was the Waterloo Chamber, which displayed countless portraits of the various congressmen and war heroes that contributed the defeat of Napoleon in 1815. The largest room in the palace, the Great Gallery, features portraits of every King of Scotland.

After making my way through the maze of rooms, I finally reached the exit and headed over to the lower ward to check out St. George’s Chapel. It was built in the 16th century and features Gothic architecture, and is in my opinion the most beautiful building at Windsor. The interior is just as stunning as the exterior; featuring high vaulted ceilings, huge stone pillars and stained-glass windows.


I met back with my group, and we exited the castle grounds to explore the town of Windsor. The streets are lined with old buildings housing restaurants and cafes, giving us numerous options to grab a bite to eat. We eventually settled on Côte Brasserie, a French restaurant right along the Thames. It was a bit expensive, however it was totally worth it to enjoy lunch by the Thames on a clear, sunny day.

The rest of our time was spent strolling along the Thames on a footpath leading into a green area. After spending so much time in London, it was refreshing to get back to nature and relax as boats drifted by us.

James L. is the Fall 2016 CEA MOJO in London, England. He is currently a senior studying Business Management at West Chester University of Pennsylvania

All factual information presented in this blog was taken from the Royal Collection Trust: Windsor Castle tour on 2/10/2016.

James Longenderfer is the Fall 2016 CEA MOJO Blogger in London, England, and is currently studying at West Chester University of Pennsylvania.
Leave a comment
Newest on top Oldest on top
Load more comments
Thank you for the comment! Your comment must be approved first