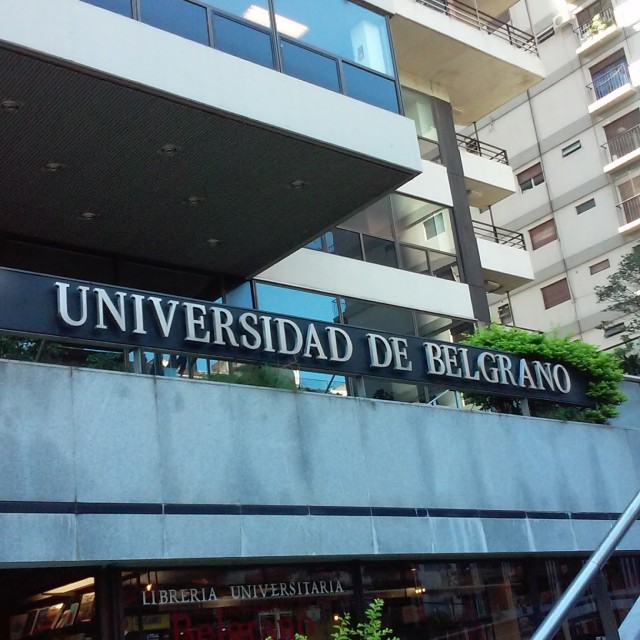 Two days ago I stepped into a Buenos Aires classroom for the first time. The look of the classroom, with the board, the projector, and the desks looked pretty much like anyone could expect it to look. But that was really where the similarities ended. Here are three great things about my classes here in Buenos Aires that make me glad I chose to study here.

There are so many people from so many different countries studying at Universidad de Belgrano. Just in my Spanish class alone, there are two Italians, a French girl, a Swiss girl, a German, a Japanese-American, a Mexican-American, and me. Before class I like to sit in the hallway and listen to how many different languages are being spoken around me. During class, it’s the same with the professors. Although most of them are Argentine, many of them studied in Europe, Asia, or the U.S. before coming back to Argentina to teach. They all have some pretty amazing stories to tell. In my human rights class, my professor talked about being a teenager during the dictatorship in Argentina. It’s a heavy subject, but hearing it from someone who experienced it firsthand gives it a whole new perspective.

My university is right in the middle of the neighborhoods where foreign ambassadors from all over the world live when they come to Buenos. The Australian Ambassador’s house is actually right across the street. It’s the same house Einstein lived in when he was here. Every couple of feet there are signs and flags marking the houses. The American Ambassador’s house is only a few blocks away. As for my classes, most of them are on the 9th or 10th floor, and the cityscape view from the classrooms is great. My home university definitely doesn’t have 22 floors. The cafes on the ground floor and the 11th also has great wifi.

Most classes don’t start until 13:00 and allow the whole morning to explore the city a little more. For now I’m still in the first two weeks of my classes, which works a bit differently here. We don’t register for our classes until two weeks after the classes have actually started. My professors call it “shopping around”, like a free trial period. We’re not committed to any of our classes until we actually register for them after they’ve started. So if we don’t like a class and want to try another one in that time slot, we can go check it out. Compared to American textbook prices, Argentine textbooks are a steal too. Each textbook I’ve bought so far has cost about 300 pesos, which is only around 20 USD.


So whether it’s the people, the neighborhood, or the classes themselves, there’s something about the university that exudes a global feel. Right now I’m sitting at the café doing my homework with a cafe con leche listening to at least five different languages being spoken at the tables around me, and it’s only the first week of class.