From China to California to Australia: Virtually Interning as a Multicultural Student 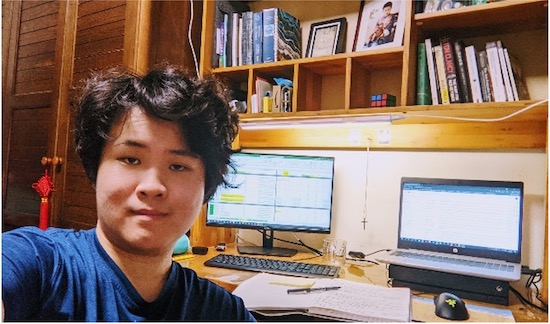 Hello everyone, my name is Yikun Jiang. I am currently taking part in a virtual internship based in Melbourne, Australia, through the CEA Study Abroad's Virtual Global Internship program for the summer of 2021. In this blog post, I will briefly discuss my background as an international student studying in the U.S. and my motivation for choosing an internship – even studying abroad again.

Born and raised in China for the past 18 years, I grew up and received an education with a deep concentration focusing on the Chinese culture and values. Confucianism and Taoism specifically have influenced me in a culturally fundamental way as forming my views and values about the world. Values include devotion to families, respect for the elders, being humble, staying loyal to your leaders and state, and always having a good moral character and well-mannered demeanor.

As an economics major at the University of California San Diego, one of the most prestigious academic universities located on the west coast of the United States, I find that American classrooms have more vibrant, eye-opening features than a typical Chinese classroom. First, one thing about speaking in the classroom. American students usually speak after raising a hand first and getting acknowledged without standing up. In contrast, in a Chinese classroom setting, students typically get accepted to stand up and speak after their teachers call their names. Another interesting fact about what I experienced in an American classroom is related to students’ behaviors. American students can even drink, eat, and sleep in an open public classroom, a phenomenon that is almost impossible to happen in a Chinese classroom setting where class rules often prohibit eating and drinking during the lecture. In addition to my classroom experience, I find that language expression is also culturally noticeable to me. In America, it seems that the sense of age and social hierarchy through people’s daily conversations and talking is not emphasized as much as in my home cultural context. In China, formal civility through daily greetings with others is culturally treasured and valued. When greeting elders, young people need to say “Nin (您) or Nin Men (您们)” as a pronominal respectful word referring to elders whom they are talking to, as contrary to English counterparts like “you" or "your.” And the expression of appreciation, like saying “Nin Xin Ku le (您辛苦了), Gan Xie Nin (感谢您),” is also usually considered as culturally valued way to show civility and kindness to elders if you talk or work with them in China. However, I do not feel a strong sense of emphasizing the same level of formal courtesy in America, even with elderly people.


For my academics, I have changed my major several times. First, the university admitted me as an international business major with a concentration on business. Throughout my freshman year, I took a cohort of economics lower-division courses, exploring mainly microeconomics and macroeconomics. Taking the lectures, talking with professors during office hours, having study groups with peers, and researching online, I gradually figured that my interest lay deeply in solely economics. From the assistance of the UCSD career center and college success coaching, they advised me on choosing a business career pathway since many jobs like finance, global business, supply chain, risk management, and so on have a significant labor market shortage of students who have a strong economics background. Also, I was personally inspired by taking a course called Econ 5 (Data Analytics for the Social Sciences) at UCSD, which also lays an excellent foundation for exploring possible business-related career paths. From Econ 5, I learned and practiced skills and techniques on software like Microsoft Excel, Stata, and R. From there, I combined what I learned on Excel and R and finally generated a brilliant research report as my final paper to the course which I presented it later onto my self-brand website.

Since the global pandemic came, I have been provided with minimal internship opportunities in both the U.S. and China. From an email sent to me by the UCSD Study Abroad Office, CEA showed promise for me to apply. Through a list of virtual programs, I found that the Summer 2021 CEA Virtual Global Internship program met my needs. The program is open to all students, all majors, and all possible career fields. Most importantly to me, the program offered internship opportunities related to economics and business, which immediately caught my attention. Then, I applied and went through several interviews, starting with a CEA regional director, then the Internship Down Under (host organization connected to my internship) advisor, and eventually my host internship company's team.

During my first interview with CEA, I mentioned that my preferred host country was Australia, because Australia and America had a similar historical-cultural background as countries with immigrants, which piqued my interest right away. For the final interview with the host company, I met with a team of top financial professionals from a company called Stay or Go, a small business based in Melbourne, Australia, focusing on providing customers with their best-personalized credit card product assessment and recommendation. During the initial interview with them, I was given a shot at interning in a business-analyst role here at the company virtually. My duties include primarily daily reports with the supervisor, monitoring and securing the spreadsheet data, learning about the Australian lending market and credit card basics, and generating business reports through data analysis. Because I believed what I learned through my first two years at the UCSD and especially the brilliant experience with Econ 5, I accepted their offer right on the spot.

As you can see, growing up in China and then traveling to a new country to study abroad have profoundly broadened and changed my views and values. With courage and confidence, I have embarked on a career pathway that I previously did not even think possible. In my upcoming blog posts, I will share more of my personal experience with my internship as the progress continues. Thanks for reading this one.

Yikun Jiang is the Summer 2021 CEA MOJO Blogger in Sydney, Australia, and is currently studying at University Of California-San Diego.
Leave a comment
Newest on top Oldest on top
Load more comments
Thank you for the comment! Your comment must be approved first