Fáilte to Galway & the Claddagh

Galway city, a vibrant, medieval-era port on the edge of Ireland’s rugged West coast and Connemara Gaeltacht (Gaeilge-speaking region). We haven’t even begun to scratch the surface of the sights, sounds, and craic (“crack”)— good times—Galway has to offer, but here are some of the eccentricities, mysteries, and histories of a traveler's first days across the pond:

Leave room for what you will bring back

...and don’t pack your preconceptions—a difficult endeavor, if you’ve ached to see Éire since you exited the womb (as I have), but, it is something to shoot for. 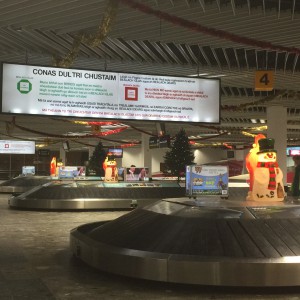 It will hoodwink you in an hour flat.  Bring lots of layers and prepare you psyche for a healthy dose of wind, rain, sun, and a couple flurries in one day's time.

Be sure to take a window seat

On your red-eye Aer Lingus flight if you plan to sleep, take the window seat. Flight attendants are very hospitable and will wake you up for your shepherd’s pie and tea if you’re on the aisle.

Be ready to parry a jest from the customs officer at Shannon Airport and take a moment to appreciate the snowmen/Santas/tinsel in the baggage claim if you arrive for the Spring semester.

All public transportation, offices and signs are bilingual
and sometimes English is not the most prominent.  You won’t regret watching a sunrise sear through fog as you roll from Shannon through rock-wall laced County Clare.

Meander Shop the cobble-stoned Quay (that’s “key”) Streets as soon as possible. These thoroughfares are the arteries of the city, lined by a panoply of colorful pubs like Taafes and Tig Cóilí.

Sunday's not just for sleeping in

Go to mass at the Galway Cathedral: the service is awe-inspiring.  If you’re not Catholic, then invite your Catholic friend to walk you through it.  Especially before you go to Gaeilge-only mass.  (NUI Galway's mountaineering club also hosts spectacular 10 euro hikes every Sunday morning).

Yes, Claddagh rings, the quintessential Irish ring with the hands clasping a crowned heart, were popularized here after their  creator, Richard Joyce, was enslaved by North African pirates, became an apprentice to a Moorish goldsmith, and, after many years, received his freedom from the British crown. The goldsmith offered Joyce land and daughter's hand if he were to stay, but Joyce headed home to love and local fame in Galway.  (Gents, if the heart's pointing away from her fingernails, bug off;  if not, well, then I suppose this story could be a pick-up line? Possibly?)

Do NOT say the Claddagh is “just part of Galway,” even if it’s just across the river. The once Gaeilge-speaking fishing village has been an independent entity since before the 5th century banishing even aspiring farmers from its shores. This is not exactly the case now, but the Claddagh still coronates its own king!

As suggested by local anthem, “Galway Girl,” “take a whirl down the Salthill Prom,” a 2-mile walk overlooking the bay, ending with Salthill’s diving tower. Feel free to take the plunge. Or you can just “kick the wall,” gaze out at vistas rising up from the bay, and check out the delectably-named Mutton Island lighthouse.