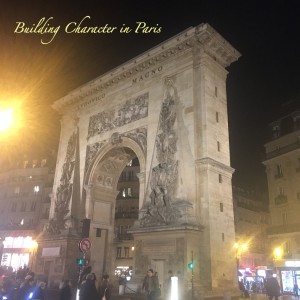 I remember my first step into Paris, my first encounter with a historical monument, my first spoken word of French, and even my first bite into a mouth-watering French dish. Most of all, I remember the unfamiliarity and the initial fear and trepidation of being alone in a big city.

Sure, I've been independent during my first year in college - except I was a mere 3 hours away from home, in a city similar to my hometown, speaking a language everyone understood.

So, it isn't surprising at all that the biggest change I've developed while in Paris had everything to do with my character.

I became fiercely independent, unafraid of being alone, more confident and secure, and most importantly, I became dramatically more mature. Living in a foreign place essentially requires you to rely on yourself and to believe in yourself. Believe that you can successfully have a conversation in French, believe that you can navigate the intricate transportation systems, believe that you can plan your own travel itineraries while also juggling classes and schoolwork.

The best way to change for the better is to step out of your comfort zone and experience things for yourself. While in Paris, I took on an internship, applied for a job, shopped and made meals for myself, traveled alone, and stayed positive and open-minded. These activities directly contributed to making me more mature and independent.

Even though I was only able to fulfill two of my major's requirements with the classes I was taking while studying abroad in Paris, I don't regret embarking on this journey at all. I feel that even beyond academics, the real life skills I've learned while in Paris will stay with me throughout my future and make me more inclined to success.

Studying abroad obviously isn't an easy, thoughtless adventure. I definitely had my fair share of struggles while abroad! Here are some things I wish I knew before going abroad:

Bonne chance and have fun!

Kayla King is the Fall 2016 CEA MOJO Blogger in Paris, France, and is currently studying at Point Loma Nazarene University.
Leave a comment
Newest on top Oldest on top
Load more comments
Thank you for the comment! Your comment must be approved first