My Experience at Auschwitz-Birkenau 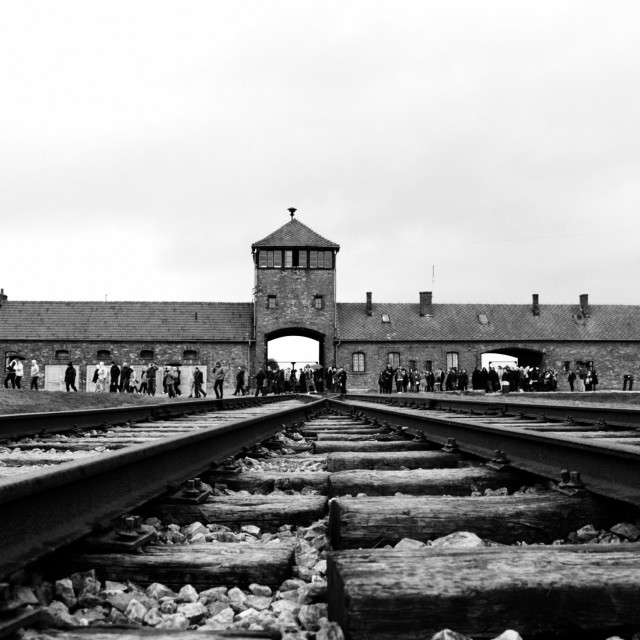 October 8, 2016 will always have a special place in my heart. We went to two concentration camps: Auschwitz and Birkenau, as part of our CEA excursion to Poland. It was an eerie day, it rained on and off and was chilly, which definitely set the tone for the rest of the day.

All of my life, I have heard of such camps and have always intended on visiting these monumental sites. I woke up feeling extremely anxious, having no idea what to expect emotion-wise. Growing up in a Jewish household impacted this experience tremendously. I have ancestors who were in the Holocaust, making this trip that more meaningful. The things I saw today were eye-opening, and I am still processing what I saw.


Our first stop was Auschwitz. As soon as I got off the bus, I was able to see the camp grounds from afar. My stomach began to twist and turn as I approached the gate that led me into the camp itself. I had seen pictures of Auschwitz before, but there is no feeling like walking into a concentration camp where your ancestors were once forced to stay, and even die. I don't even know how to put it into words; I felt humility. Humility for my people who lived their lives in this camp and weren't as fortunate as I was to be able to walk out of the camp; that's what really gets to me. The fact that people are now able to enter and exit freely and come to these camps because they want to. The people living in the camps were stuck there, forever, until death; the ones who made it out alive were very rare and extremely lucky.

Looking around at the barbed wire made me cringe. I felt my eyes getting heavy as soon as I walked in. You get this indescribable feeling where you are in complete and utter shock. In shock that these grounds are real. I don't mean that I doubted the Holocaust ever existed, because that is the furthest thing from the truth. What I'm trying to say is that coming to the camp is a huge reality check. We all have seen movies, pictures, museums, but there's nothing like being at the place where it all happened. Auschwitz-Birkenau was the place where the most people were killed in the Nazi regime. Being there puts everything into perspective.

Our next and final stop was Birkenau concentration camp. I've truly never seen anything like this. The camp was ginormous; it gave me the chills. Birkenau's look was more what I expected, however, it was completely different from Auschwitz, which was only a 5-minute drive away. Minutes after we arrived, it started raining more than it had all day. The sky grew darker as time went on, it was truly spooky. We even saw a cat wandering around the grounds. Around the camp were burned down gas chambers, on one of them the steps to get inside to the chamber were still standing. It felt so real, putting everything I've learned in the past into perspective. Auschwitz was more of a museum, however, still the real thing, but Birkenau was a wake up call in and of itself.

My experience today was indescribable. I highly encourage you all to take a trip to these camps because it is something everyone should see. History never dies, and today really emphasized that for me. "Those who cannot remember the past are condemned to repeat it," George Santayana.

Betsy K. is the Fall 2016 CEA MOJO in Prague, Czech Republic. She is currently a junior studying Journalism at University of Arizona.


Betsy Kaplan is the Fall 2016 CEA MOJO Blogger in Prague, Czech Republic, and is currently studying at University of Arizona.
Leave a comment
Newest on top Oldest on top
Load more comments
Thank you for the comment! Your comment must be approved first