My French Fumble: The Start of Study Abroad in the Alps 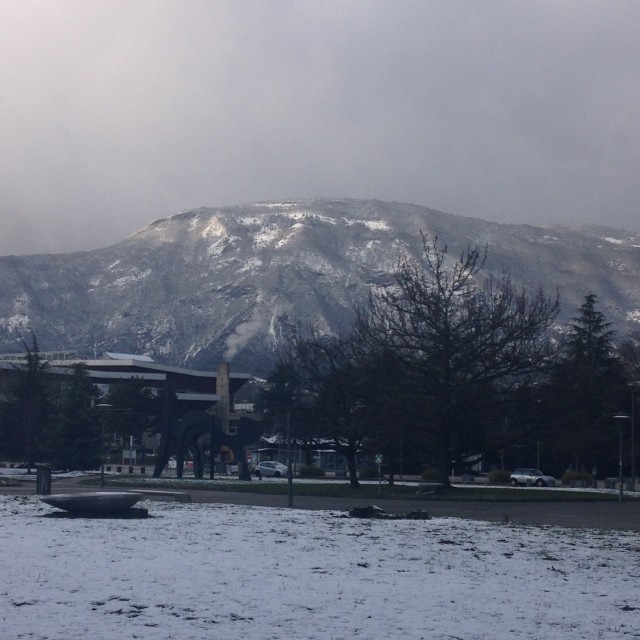 We were standing in the security line at LAX when we turned around and heard a TSA security guard say “Families go down the stairs. Y’all have to leave.” Our families had, unbeknownst to us, been waiting for what felt like an hour for us to go through security. We laughed. It was probably nervous laughter. Egan and I were bracing ourselves for a 15-hour journey to Grenoble, France, while our parents were finally having to accept that we would be living in Europe for five whole months. They were uninhibited in showing their emotions and defied the dreaded TSA by staying in the airport to catch the last glimpses of us. While we, on the other hand, hid our anxiety between white headphones and casual conversation. 5,945 miles, 2 overpriced airport deli sandwiches and 3 in-flight movies later and our anxiety was replaced with exhaustion. Also, I think our parents had left the airport by then.

My first impression of France was from the bus ride from the airport in Lyon to the bus station in Grenoble. It was undoubtedly beautiful. I stared out my window looking at the mountains that would quickly become the comforting border outlining my new home. I was daydreaming about all the adventures I couldn’t wait to have. Egan was literally dreaming, as he was asleep the whole time. After an hour, we were greeted at the bus station by Patrick, our program director, who talked to us for over an hour as we were waiting for the others to arrive. I say talked to us because we were too tired to properly engage in the conversation.

Rapidly spoken French and pigeons scattering about became our background music. After a while my roommates arrived and we took a taxi to our apartment. It felt like we were thrust into everything all at once. I had never met my roommates before and I wasn’t acquainted with Grenoble either. I would have been having an internal frenzy of culture shock if it weren’t for the exhaustion.  That night, I went to bed without having dinner.


The next day, I indulged in espressos and tartelettes and, yes, dinner. The satisfaction I got from eating a 4 euro sandwich from a local boulangerie was worth my fear of having to interact with the local shop owner in French. I quickly learned that the food here in Grenoble is cheaper and of better quality than what I’m used to having in Orange County. All my French dreams were coming true!

Then I went to the grocery store. I had studied French for two years. I was confident. But when the cashier asked me how I was paying I didn’t understand a word she was saying. I felt so embarrassed. What was I doing in France? How could I take classes in French if I couldn’t even check out at a french grocery store? Twenty seconds later, however, I realized what she was asking and paid with my credit card.

All the anxiety and culture shock that I insisted I didn’t have manifested itself in a moment of frustration that day.  In that moment of not understanding the cashier, I regretted leaving my family at LAX. France was supposed to be hot chocolate and baguettes and grand mountains. My time in Grenoble was not supposed to be spent with fumbled interactions in French. But now after living here for two weeks I’m realizing that my time on study abroad needs to be a mix of both. I can’t hide from my anxiety. This semester I will proudly fumble.

Samantha Steed is the Spring 2016 CEA MOJO Blogger in Grenoble, France. She is currently a junior at Soka University of America