If you are in Rome for even more than a couple days, a major "check" off the to-do list for most tourists is attending a Papal mass at St. Peter’s. I’ve been lucky enough to already go to a mass in October, but the one that I went to this past Wednesday was more than I ever expected for a few reasons.

Before I get into my experience, let me give you a little background information on the mass itself. The Papal audience happens every Wednesday morning and starts around 9:30 a.m. People begin lining up outside of St. Peter’s Square between 5:30 and 6 am. Pope Francis is driven around in the Pope mobile throughout the square, before he begins the mass, which gives the audience a chance to wave, get a closer view, and pass religious items to the guards, who surround the Pope. Once Pope Francis makes his way up to the front of the Basilica, he begins mass. The mass is said in about six different languages.

I went to the mass with my roommate, her friend, and my parents who were visiting for the week. We got up at 6 am and if that wasn’t hard enough, it was raining. We managed to pull ourselves out of bed, wrapped in raincoats and umbrellas, met my parents at the metro, and then headed over to Vatican City. It’s still raining pretty hard as we wait in line to get into the actual square. We were surrounded by dozens of different languages as we blended in with the sea of umbrellas. We made it into the square at the absolute PERFECT time: right as the guards opened the barriers to get into the second section! It was the most perfect timing; we sprinted to the front and got a front row seat! This way, we were the closest we could get to see the Pope up close! It couldn’t have been better. 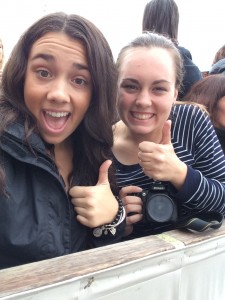 We came prepared with towels to wipe off our chairs and food to snack on as we waited hours for the arrival of Pope Francis. It still is raining, but all of a sudden the rain stopped when Pope Francis made his way around the square. It was actually one of the most surreal experiences I’ve had thus far. The rain held off for the length of the mass and as soon as Pope Francis left, the rain started up again. I felt so incredibly blessed after witnessing that. 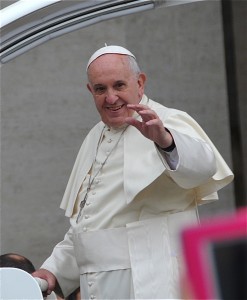 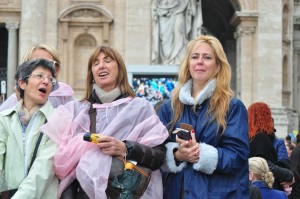 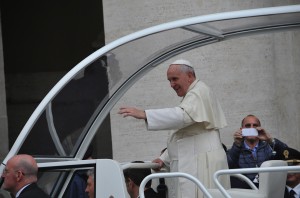 Advice to future Rome study abroad students: Get to the mass early, sit as close to the barricades as possible and take in as much as you can; the people, the sounds, the message of the mass. It’s amazing and an experience I recommend to everyone who comes here!

Lauren Healy is the Fall 2014 CEA MOJO in Rome, Italy. She is currently a senior at Clarion University of Pennsylvania.