The other day my friend Gaby and I decided to go on a run to burn off some calories from the copious amounts of cheese we’ve been consuming (read: because we are athletic people who show our zest for life by challenging ourselves physically!). We generally like to start our circuit by walking to this pristine beach at the end of our street, where the azure waves crash against the rugged shore and we can pretend for a few moments that we’re about to lounge luxuriously on the golden sand, not haul our bodies up and down a steep hill for 5 miles.

Anyway, Gaby and I were chatting and catching each other up on what had happened over the weekend like usual. I was assaulting her with mundane details about my life, fully believing that she would soon be returning the favor. However, this week was different. The turnout of her weekend came as such a surprise to both of us that I just had to share it here.

So on this particular Saturday, CEA had planned to take us on a day trip to Cannes and then on a boat ride to St. Marguerite Island, where we were to have a walking tour of the town and museum, and would then be given the rest of the afternoon to go rock-jumping and snorkeling at the island’s gorgeous beaches.

That preceding Friday, Gaby and her roommate, Katie, had decided to go on their own day trip to Ventimiglia, the first town past the Italian border. They successfully managed the hour-long train ride, and had a great day that involved gelato (obviously), and getting lost in what they later realized was the sketchy part of town. 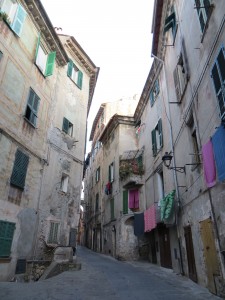 They had thought ahead and knew that the last train home was at 11:30 PM, and at that point it was only 9, so they set out in search of a cheap dinner. They ended up finding a great little place where they had a 3-course meal for only 12 euro. They enjoyed a leisurely dinner, recounting the high points of their day and laughing jovially to each other at how they had so casually popped over to Italy for a bite to eat. 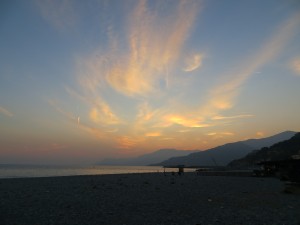 By the time they had finished, it was only 10 PM, which gave them ample time to pick up some things at the grocery store to pack a lunch for tomorrow’s excursion. By 10:30, they had eaten, grocery shopped, and were on their way to the train station with plenty of time to spare. As Beyoncé would say, FLAWLESS.

However, upon arrival at the train station, they quickly realized that something was not right. Where was everyone? Whose dog was that?

Gaby hastily went inside to speak with someone to confirm that the next train would indeed be at 11:30 as advertised, but was greeted with an unwelcome surprise. “Finite! Finite!” the lady in the booth kept repeating, shaking her head and gesturing her hands like a marionette being controlled by an unskilled puppeteer.

With a sinking feeling in her stomach, Gaby soon realized their fatal error. While she and Katie had been correctly following the Summer train schedule – which was supposed to be in effect until the following week – Italy had had other ideas, and had decided that it was time to embrace the Autumn season. The trains had switched over to the Fall schedule without warning, and the girls had missed the last one.

Gaby informed Katie of the issue at hand, and being the multilingual talent that she is, spoke with a police officer about their situation in Spanish. The officer, impressed with this unusually gifted American, was willing to help. He suggested they take a taxi to Menton, the first French town over the border. Maybe there would be a bus there that could take them back to Nice or Antibes? They were willing to try their luck.

The officer kindly helped them find a taxi driver who would be happy to take them over the border for a mere 30 euro. The girls felt that the price of freedom must have undergone some inflation, or at the very least been subject to an international service fee, but who were they to complain? 30 euro it was.

For the duration of the ride, Gaby tried her hand at her third language of the night, and conversed with the taxi driver in French, which turned out not to be his native tongue either. After the driver recognized the name of the Italian town in which Gaby’s relatives reside, he deemed his cargo somewhat more relevant and valuable, and thereafter did his very best to help the girls.

Once they reached Menton, the driver went inside with Gaby and Katie to help them inquire about a bus. There didn’t appear to be any buses or trains running at that ungodly hour of 11 PM, so he found them a new French taxi driver who agreed to do his part in the now international quest of getting them home.

New Taxi Driver initially advised that they just find a hotel for the night, but quickly revoked that idea once he discovered that Gaby and Katie only had 50 euro between them. He kindly explained, in so many words, that Real People come to this area, not just broke college kids, and 50 euro would maybe get them a cot in a basement somewhere. “Why don’t you just wait at the train station until 5 AM when it will reopen?”, he helpfully suggested.
The girls succumbed themselves to this fate. “It’s a fun adventure!” they laughed nervously to each other.

New Taxi Driver told them that since he lived in Nice, (only a 15 minute train ride from Antibes), he would be willing to bring them that far once his shift was over. Left with no other choice, Gaby and Katie agreed. The plan had been set in motion, and New Taxi Driver drove off into the velvety night to begin his shift, leaving them alone to wait indefinitely at the station.

Their guardian angel must have been watching over them at that moment, because just then the girls heard a voice coming from the curb.

“Yes, yes we are!!!” Gaby had to physically restrain herself from kissing the girl’s feet.

“I obviously don’t know you at all, but I overheard your conversation as you were walking over here and I did an international study program over the summer and have been in a similar situation. So if you’d like to stay over at my apartment tonight you’re totally welcome to!” the girl offered.

Did it sound sketchy? Absolutely. Gaby and Katie accepted enthusiastically.

The girl explained that she was a student in Menton and that both of her roommates were away for the weekend, so she had extra room back at the apartment. She was at the train station at that moment because she was waiting to retrieve her roommates’ friends – none of whom she had ever met before – to bring them back to the apartment.

The three of them chatted and got to know each other as they awaited the arrival of the rest of the group. Once the gang was all there, introductions were made, and the motley crew headed back to the Savior Girl’s apartment, where they all ended up staying up late to hang out and learn more about one another.

Savior Girl took her role as such seriously, and went so far as to lend Gaby and Katie her clothes to sleep in, as well as her entire bedroom and bed. The next morning, the whole group of them got breakfast together, and lifetime bonding ensued. 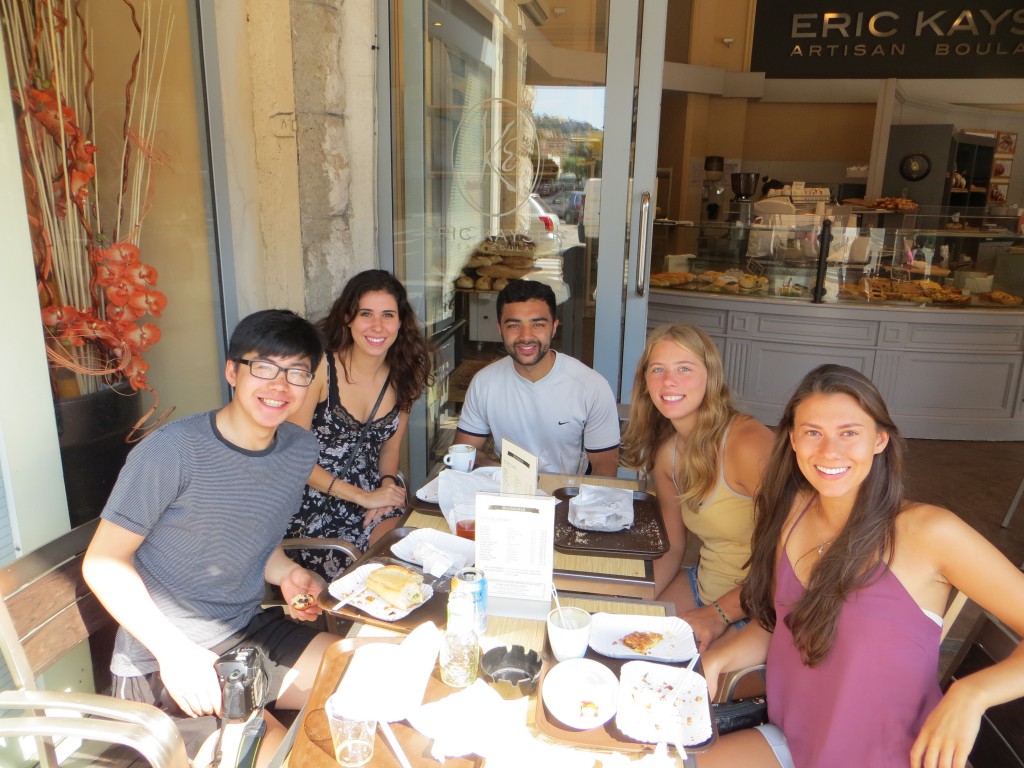 At this point Gaby and Katie had laid to rest the idea of making it back to Antibes in time to join the rest of CEA for the excursion, and instead enjoyed the day exploring Menton and savoring the knowledge that they were somehow still alive. The sun was shining and it seemed that each time a bird chirped, it was urging them to visit that bakery, or check out that cool clothing shop. The weather was perfect and the day was theirs. What had turned into a strange nightmare had turned back into a dazzling daydream, and they had made some friends along the way. All in a day’s work. 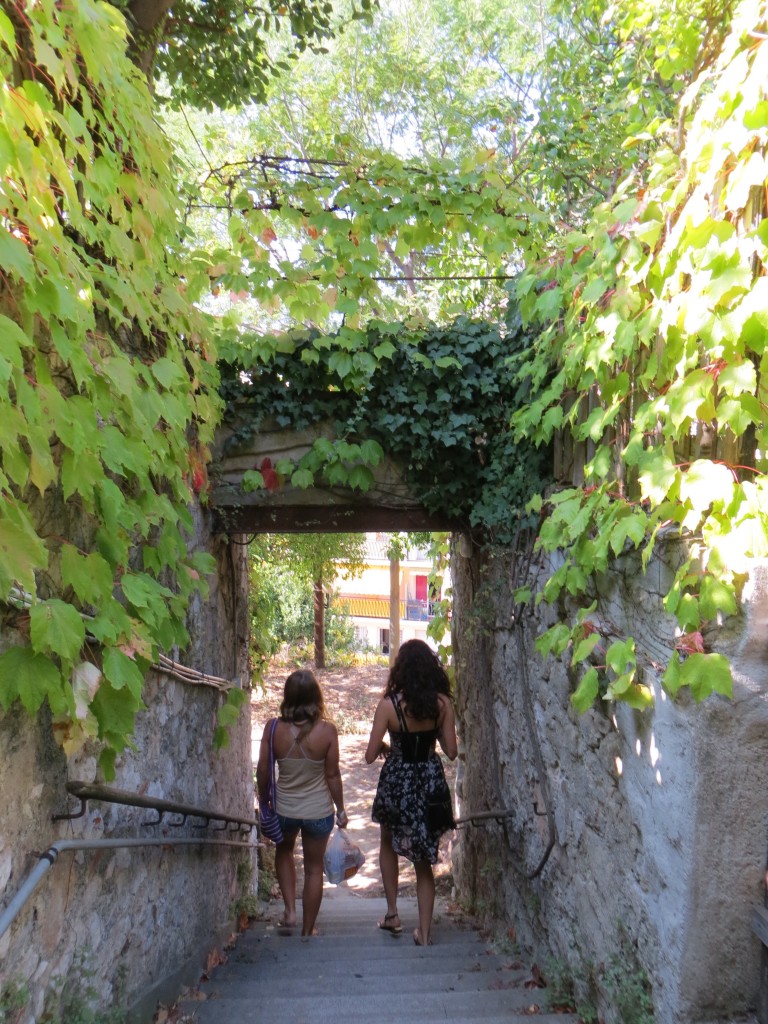 Charlotte Walker is the Fall 2014 CEA MOJO in French Riviera. She is currently a Junior at Northeastern University. Read more about our CEA Content Creators.
Leave a comment
Newest on top Oldest on top
Load more comments
Thank you for the comment! Your comment must be approved first