Over the past couple of months, I have been completely wrapped up in a certain form of entertainment that I never gave much credit to in the past. It is one that I never took much of an interest in until I stumbled across a prank video on YouTube, that somebody had linked on Facebook. From that moment in time, I have become so interested in this new-found ability for people to publicly video log what they are doing. I also became very excited because most of the videos that I had been watching were about young adults living in the UK. This was great for me because I knew that I was going to be studying abroad here in London. Therefore, I became so enveloped in this generation of new media. 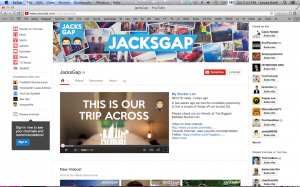 After watching several videos on the YouTube channel, JacksGap, I started to further explore other fellow British YouTubers (a name that they call themselves). I became very interested in what all of them were doing. Now, this was not just because their sites were silly and fun to watch, but the videos also give out a lot of useful information about the city of London and serious subjects.
Channels like JacksGap, FunForLouis, Ben Brown, and Zoella, all share similar qualities but portray very unique styles.
JacksGap’s channel consists of two twin brothers, Jack and Finn Harries, who film interesting videos of all different kinds. Each week, they post videos that deal with subjects from cancer relief projects, to pranks, to them just basically sitting there and talking about what interests them. One of the videos that they have recently done was about their journey on The Rickshaw Run in India. They filmed the entire trip. Here is a video of them preparing for their long journey supporting a great cause.
http://youtu.be/9fNOu_zfbsY
Louis Cole (FunForLouis) is another British YouTuber who vlogs his life every single day. Now usually this kind of channel would lose interest over time, however, I think his way of filming, the music he uses, and the way he edits his videos are so unique that his audience stays enticed. One of the features about Louis’s videos that I love the most are his introductions. They are so unique and characterized toward him. This video also shows the mass amount of people from London who watch his videos.
http://youtu.be/NHd1w-kTal8
Ben Brown is a channel that I have recently become really interested in because of his series of videos that he calls ‘Visual Vibes.’ The high quality of his videos keeps his audience so captivated. Here is one of my favorites from his Visual Vibes series. I think the video speaks for itself!
http://youtu.be/fKPIIYhR8AY
On the other side of the YouTuber realm, you have videos from Zoe Sugg (Zoella280390), Alfie Deyes (PointlessBlogTV), and Marcus Butler (MarcusButlerTV) who make videos that consist of them doing funny skits, playing games/challenges, and ‘how-to’ about topics that relate to the general public. Here is a video of Zoe and Marcus doing the Accent Challenge. It is from the YouTube channel Zoella280390.
http://youtu.be/MSUnNLdMWz0
All of these British YouTubers have made a name for themselves by creating videos that entertain the public. Whether is a video of them filming themselves doing silly challenges or making serious films on cancer relief, they have all found a way to entertain people from all over the world. It has also given them the ability to travel all over the UK, and to parts of the United States. I hope you enjoy these British YouTube channels as much as I do!
Laura Koch is the Fall 2013 CEA MOJO in London, England. She is currently a sophomore at Georgia State in Atlanta.
Read more about our CEA Content Creators.
Leave a comment
Newest on top Oldest on top
Load more comments
Thank you for the comment! Your comment must be approved first