November 05, 2013
by CEA Content Creator
SHARE SHARE
When people think about the French, some common stereotypes often come to mind. The French wear striped shirts and berets regularly. They can be found under the Eiffel Tower, eating baguettes.

Obviously this particular image of a French person isn’t accurate. But throughout my time in Grenoble this semester, I’ve noticed some stereotypes that definitely have a ring of truth to them, as well as many that don’t. In this week’s post, I am going to reflect a bit on my own experiences with several of these commonly perceived French ‘characteristics.’

Baguettes
I eat baguette at almost every dinner with my host family. Sandwich stands sell sandwiches made from baguettes, and it’s not uncommon to see people with a baguette poking out the top of a bag. There is definitely truth to be found in this stereotype.

Pessimism
I’ve had two professors discuss the stereotype of the French as pessimists already. They both seemed to agree with this perception. Personally, I don’t find the people here to be less happy than people at home. If I say bonjour to someone in the park, I always get a smile and a reply. There are grumpy people in every society, but my experience hasn’t led me to believe that they all live in France. 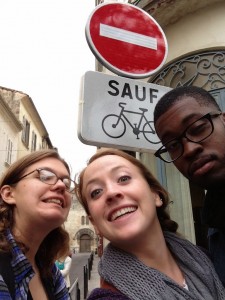 When deciding what to pack, everyone kept emphasizing how fashionable the French were. On the contrary (once you get out of Paris), I don’t find the people here to be particularly stylish. There is a different style here than in my hometown in Kentucky, and on the whole you encounter fewer people out and about in sweats and tennis shoes, but it’s not always high fashion like I was led to believe.

Bicycles
There’s a common stereotype that the French ride their bicycles all the time. While you do see a lot of people on bikes here, I think it is because we are in a city where things are closer together, rather than it just being a “French thing.”

These are just a few common stereotypes. For more examples, you can watch this video that was showed to us by a professor on one of my first days. Here’s a link to the English version:

The interesting thing about stereotypes is that they’re almost always there for a reason - some are gross exaggerations, in which a little truth can be found. Others highlight differences found between cultures. As I become more accustomed to the culture here, its fun to think back on the ideas I had about how life would be in France before I left the USA. I realize now that many of those assumptions were based off of stereotypes!

Aimee Goffinet is the Fall 2013 CEA MOJO for Grenoble, France. She is currently a senior at the University of Kentucky.