When studying abroad everyday can be a culturally enriching experience, if you let it. I have already come to realize that in the three weeks I have been here, time really does fly! It is imperative to make the most of your time abroad and open yourself up to other cultures as much as possible.

I am excited to tell you about an amazing cultural event that I shared with some fellow students in my program at the International Tourism Day at Universidad Metropolitana Castro Carazo in downtown San José. Through food, conversation, music, and dance we were able to connect with local students while exploring other cultures of the world. 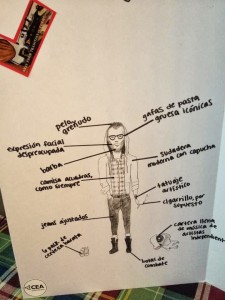 Diagram of the typical male hipster

Our "gafapastas" presenting on the US hipster culture! 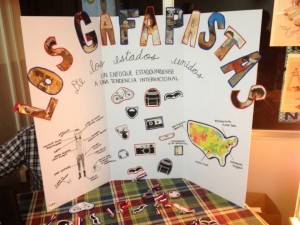 
A few weeks ago CEA presented us with the opportunity to present (in Spanish) about the United States at this event. A few girls in my program debated about what aspect of American culture would be the most unknown and interesting to the Ticos (Costa Ricans). They decided that “hipsters” in the U.S. would be a perfect topic for university students in Costa Rica to learn about. They put together a PowerPoint presentation, posters, went thrift shopping for their “hipster outfits”, and purchased typical “hipster food” to share: organic coffee, pita chips, and hummus. They were fully prepared to introduce the Tico students to “the hipster nation”.

The term hipsters translates to “los gafapastas” in Spanish, which to my surprise many of the students were not familiar with. The girls’ presentation included the typical hipster music, clothing, food, and past times. They even included a detailed head-to-toe diagram of an American male hipster. Since my college experience has been in a large metropolitan area I can spot a hipster from a mile away, and I have to say that this representation was spot on. The judges were thoroughly intrigued by this American subculture and large groups of Ticos flocked to our station to listen to them present. The hipster nation had become a popular destination.

Although I was not part of the presenting group, myself and a few other students in our program tagged along for support as well as to enjoy the event and converse with some Ticos. After we watched our group present in front of the judges, we had the opportunity to tour the event and hear the other students present about countries all over the world ranging from Greece to Panama to Brazil. We sampled local delicacies and even tried a few beverages like the Brazilian caipirinha. The Ticos were so excited to have American students to converse with, because they were learning English just like we were learning Spanish!

As I mentioned before, we were expected to present in Spanish because they were all presenting in English. This aspect of everyone practicing their non-native languages is what made this event so unique. It fostered an environment where every student could speak without fear or hesitation. The beauty of it all was that while speaking with the Ticos, even though the conversation was carried by two different languages, there was complete understanding. We helped each other out with vocabulary and complimented each others speaking skills. We gained confidence while making friends with the locals, which had seemed so intimidating to me prior to this event.

I left feeling more confident in my speaking skills and comfortable making friends with the locals. I realized that they were most likely just as nervous to talk to us as were to talk to them, so why not make the first move! What better way to explore this country and culture than with the help of some locals; not to mention they are dying to get a taste of American culture. I look forward to taking the plunge, putting myself out there, and truly making the most out of my short time here in Costa Rica!

Emily Franks is the Fall 2013 CEA MOJO in San José, Costa Rica. She is currently a junior at DePaul University in Chicago, IL.