Going For Pinchos in Gràcia

October 10, 2013
by CEA Content Creator
SHARE SHARE
Ariadna Casa Solà, a local student at the Universitat Autònoma Barcelona collaborating with CEA and Rafael Zamora, a sophomore from California Polytechnic State University – San Luis Obispo, talk about their outing in the Gràcia neighborhood of Barcelona and dinner at Pintxo Attack.

On Wednesday, September 18th we organized an outing to the Gràcia neighborhood for the winning team of Mapping My Barrio (orientation activity). Gràcia is a great neighborhood for students to explore because there are many little cafés and terraces that really help you feel the Mediterranean atmosphere and lifestyle of its inhabitants. Once the students entered Gràcia’s neighborhood, they were surprised because they were not in the cosmopolitan, overcrowding and bustling Barcelona that everybody knows. 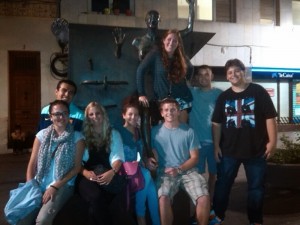 Lara, Berta, Alicia, the five students and I wandered around some of Gràcia’s main narrow streets, such as Carrer de Verdi, and well-known squares, such as Plaça del Sol, in which we told them a little bit about their history. Finally, we ended up in a typical bar, called Pintxo Attack, in which the students could savor different Spanish and Catalan flavors, such as sobrasada (Majorcan sausage), xistorra (fast-cured sausage) and angules (little eels) among others. Their faces were really expressive due to the lack of knowledge of the ingredients; however, they did not think twice about ordering some new products from their host country. Even though it was difficult for us to translate and explain some of the typical products and ingredients from the menu because they are not common in the US, we all had a really fun evening. 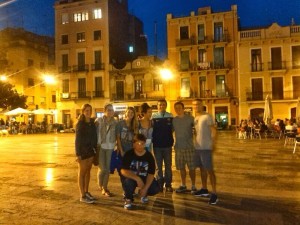 This was a good experience for several reasons, such as showing the students how Spanish people tend to share dishes in order to taste a little bit of everything, ordering various pintxos and sharing some tapas like patatas bravas. This is not a common thing to do in the US. In addition, it was a different experience because the students could get away from the main tourist hotspots in the city center and they could explore a new neighborhood, immersing themselves more deeply in the Spanish and Catalan culture. – Ariadna 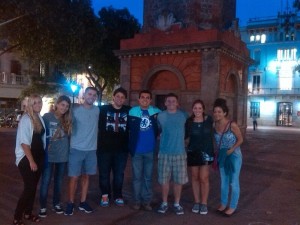 The Catalan students took us to Gràcia and showed us a few plazas where locals hang out that were way bigger than places by our apartment. There were a lot of people sitting outside, playing music and seemed like a good place to meet Barcelonians. You could definitely see the Spanish lifestyle. People like to talk, hang out and be outside. I thought this was different to my friends back in California as we tend to go home right after work or school and hang out inside. When we got to the restaurant Pintxo Attack, I wasn’t exactly sure what we would have or how we would order. We decided to order a few types of pinchos and tapas. The Spanish girls put their plates in the middle of the table for everyone to try and we traded or swapped one pincho for another. We ended up having one pincho left “el pincho de la vergüenza” and I felt hesitant taking the last one because I didn’t pay for it. After talking about this I realized that in the US if I pay for food I consider it “mine.” In Spain it seems like it is more communal and people share things like food. For example, you can eat the last pincho even though you didn’t pay for it. ;) Overall I thought this activity was cool and we saw places that we never would have gone. Thanks Ariadna, Alicia, Lara and Berta! – Rafael 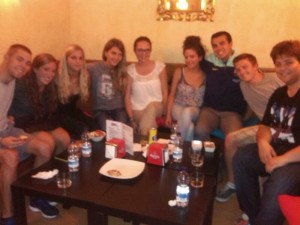