March 09, 2012
by CEA MOJO
SHARE SHARE
The students in Christopher Edwards' Communication and Global Competence class arrived at 9:15, as usual, ready for a discussion about history and intercultural communication. Little did they know that French students from the neighboring school Duperré would be joining them for a morning of cultural and linguistic exchange.
Lead by Professor Chandrika Casali, the Duperré students, all majoring in fashion, are required to enroll in 2-3 hours of English class per week during their studies. For the past three years, Professors Casali and Edwards have organized this exchange to give their students the opportunity to A. communicate with native speakers and B. connect with other students, so that the exchange can continues on their own time, throughout the semester.
There was a bit of hesitation at first, but once the groups were formed, there was no stopping them.  Students spread out within the CEA Global Campus in Paris - some in the lounge, others in classrooms, and covered subjects ranging from great eats in Paris to the differences between the French and American university systems.  CEA students were surprised to learn that many Duperré students were either not from Paris, or were living in suburbs just outside of Paris, with their families.  While Duperré students were enrolled in a two-year program after having completed the rigorous French baccalauréat, CEA students were completing four-year degrees at various American universities. 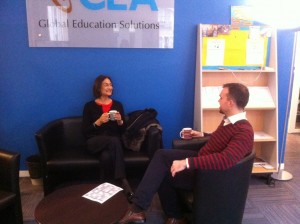 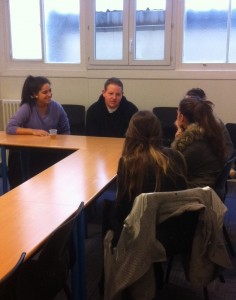 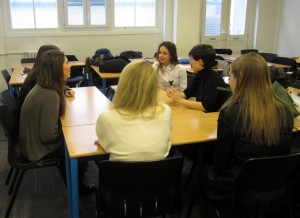 Two Duperré students speak with a CEA group... we popped in just as a discussion about the American countryside and the French countryside began.  How do you say "vache" in English???
By the time the hour was up, email addresses were being exchanged and "friend me" could be heard echoing in the hallways. Mission accomplished!
Read more about our CEA MOJO Bloggers & Photographers.
Leave a comment
Newest on top Oldest on top
Load more comments
Thank you for the comment! Your comment must be approved first