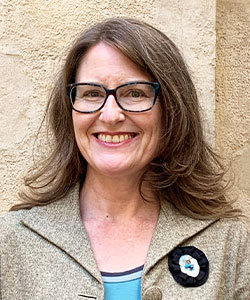 After a 3-week summer program in the U.S.S.R. with homestays in Leningrad and Moscow, Susan attended Randolph-Macon Woman’s College in Lynchburg, Virginia, earning a Bachelor of Arts in English and French. She spent her junior year studying at Université Paul Valéry in Montpellier. After a rough start, she didn’t want to leave so moved to France after graduation to teach English at a Parisian middle and high school through the French government’s Teaching Assistant Program In France (TAPIF). She then worked in Paris at an international organization and teaching English as a Foreign Language.

Following a Master’s in French at Université Paris VIII, Susan earned a dual doctoral degree in Comparative Literature and French from Paris VIII and Rutgers University. This led her to return to the U.S. where she taught French and Francophone studies for 15 years. Leading experiential study abroad trips to France and facilitating student development in this way was one of her favorite experiences and it’s now part of her daily work at CEA!

Susan loves to discover cultures from the inside and has had great homestays of at least a week in Argentina, the Czech Republic, Costa Rica, Italy, Sweden, and Switzerland, in addition to her other global travels. She dabbles in baking and gardening and is a registered yoga teacher. Susan encourages students to be open to experiences and chance encounters abroad and to “try something new while you’re in a new place.”