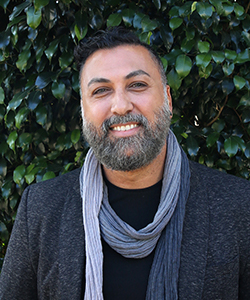 International Operations
Ahmad is originally from Cairo, Egypt, where he lived for 22 years. His first foray into study abroad came when he lived in the U.S. as an exchange student during his senior year of high school. That experience inspired him to work in international education, where he has built his career over the past decade. After graduating with a BA in International Relations from the American University in Cairo, Ahmad immigrated to the U.S. in 2001, where he pursued his graduate studies at DePaul University and studied abroad in The Netherlands as part of the Summer Institute on Sexuality, Culture, and Society.

Ahmad’s first position in the study abroad field was as a Group Study Exchange Coordinator at The Rotary Foundation, where he worked on short-term exchange programs for young professionals interested in learning how their vocations are practiced internationally. Next, as a Training and Development Manager at the Center for Cultural Interchange, Ahmad trained field staff on J-1 visa regulations and worked with vendors to develop an online application and monitoring system for exchange students. He was also the Illinois Regional Director, responsible for recruiting field staff and placing students with qualified host families during their academic year in the U.S. Finally, Ahmad served as a College Relations Manager for Customized Programs at IES Abroad. During his four-year tenure, he oversaw the development of short-term, quarter, and semester-long programs for schools in 17 states, and represented the organization in regional, national, and international conferences.