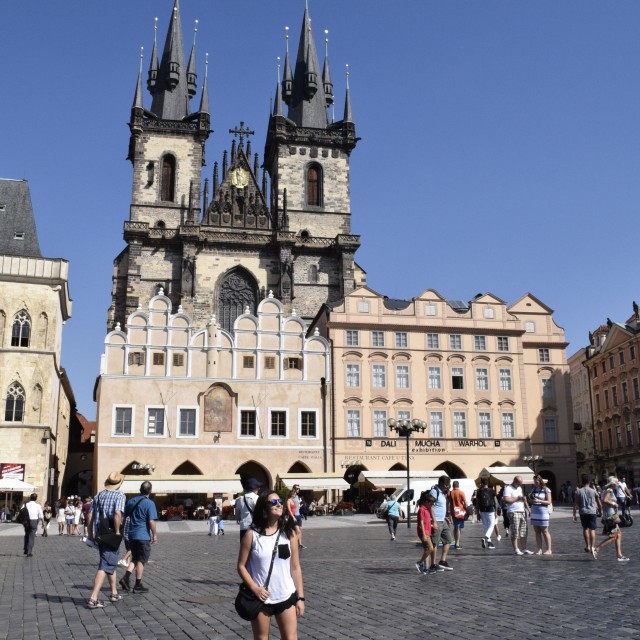 It's official, I've been here for three weeks; it's to surreal and crazy to even think about. This experience has definitely been quite the adjustment, but I feel safe to say I'm doing much better than I was the first two weeks. I decided to travel alone and at first it was very difficult finding my place.

My only class on the first day got canceled. Still, it was hard to be alone for so long while everyone else was at class, meeting their classmates. That day, I decided to explore Prague with the ultimate companion: my camera.


At Anglo-American University, I am enrolled in five courses:

All five of these classes fulfill University of Arizona's general education, major and minor requirements.

My next-first day of class was the following Monday, where I only have Media and Democracy in the evening; quite late for a three-hour class. The only difference between a class like this being in Prague rather than at the University of Arizona is that there is a wide variety of students. It's interesting to hear students from other countries input on democracy, especially if their country's government isn't a democracy. Coincidentally, there is this one man in my class who is from Russia and certainly has a lot to say. For example, this past Monday we were talking about how Hillary Clinton left the 9/11 ceremony early due to pneumonia and he felt the need to insert his opinions about the firefighters of 9/11. Clearly we come from different backgrounds, but hey, everyone's thoughts are valid in a democracy, right?

Tuesdays, I am lucky enough to have three three hour classes throughout the day! I begin the day just before noon with Video Storytelling, which I absolutely love. I've taken many courses similar to this in the past, so it's safe to conclude that I have this class in the bag. I am one out of three Americans in the class, something I've really learned to appreciate. Coming from a journalistic background, I feel that I'll be able to help the students that aren't so familiar, especially coming from another country. Jewish Prague is right after. Since I'm Jewish, I felt that this course would be suitable; so far, I believe I was right. It's interesting to learn about how the Jews lived in Prague, starting from the beginning. We also take three field trips - score! To end my day, I start Digital Tools for New Media in the evening. Let me tell you, the professor is awesome but I did not expect to be taught how to code. This might be a challenge, but I'm sure I'll get through it.

Wednesdays are the best; only one class and I end school at 2:15 in the afternoon, leaving the rest of the day for exploring and finishing up some homework. The class is Arts and Cultural Management, which I know absolutely nothing about. When I first got to class, I was shocked to see that on the syllabus it was classified as an "advanced" class. My teacher is also Czech, but speaks English pretty well; I'll be able to follow along.


All in all, my classes are very interesting, and I've been blessed with the privilege of experienced and intellectual professors. I can't wait to see what the rest of the semester has in store.
Betsy K. is the Fall 2016 CEA MOJO in Prague, Czech Republic. She is currently a junior studying Journalism at University of Arizona.

Betsy Kaplan is the Fall 2016 CEA MOJO Blogger in Prague, Czech Republic, and is currently studying at University of Arizona.
Leave a comment
Newest on top Oldest on top
Load more comments
Thank you for the comment! Your comment must be approved first