January 14, 2016
by CEA Content Creator
SHARE SHARE
After two months of classes, my semester abroad was already (or only?) half'-way through. It was time for a well-deserved break, and the weekend trip was an easy decision: our CEA group was going to Panama! 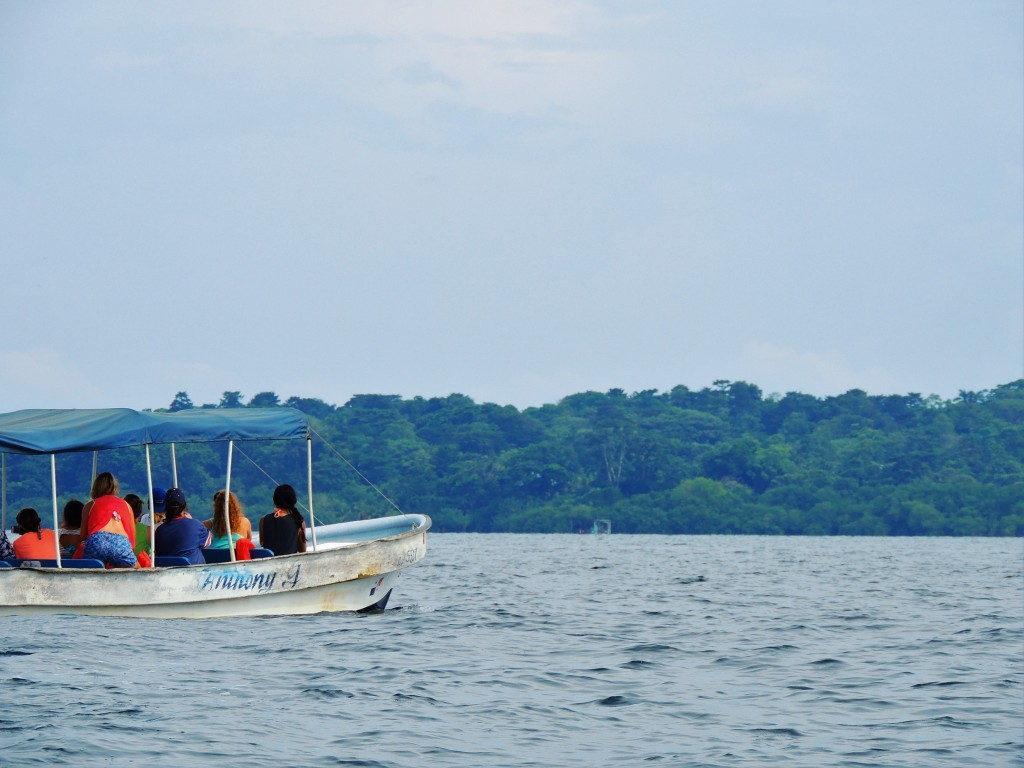 Though the ride was long, it was enjoyable in the cushioned seats and with Jurassic World playing on the TV screens on the bus. We made it through three checkpoints, paid four dollars, and showed our passports twice in order to enter the country, and though we only stayed for four days, it was a unique experience and quite a change from our lives in Costa Rica. Adjusting to a different routine (and different time zone) in Panama proved how accustomed I am to Costa Rica and the life I had constructed around my classes, meals with my Tico family, activities with CEA, and weekend excursions to explore the country.

We stayed in Bocas del Toro long enough to start understanding the town and to start finding a new routine of group breakfasts, long hours at the beach, dinners out with our friends, and sometimes evening festivities on other nearby islands (accessible by water taxi!). Being in Panama has shown me another way of living the laid-back Latin American life, and it's given me enough time to revitalize and be ready to return to my studies in San Josè.
Though most of the weekend was relaxing, I learned a few things through experience on how to best enjoy time in Panama.
1) Don't forget your dollars: If you can, pack extra money from the United States to use when/if you go to Panama. It was a hassle for me to take out colones from the ATM and then exchange those for dollars at the bank, since it required me to present my passport, tell them my Costa Rican address, and also pay a transaction fee. There are some ATMs that dispense dollars directly, but of course the only one I found was broken. Also, there is an ATM in Bocas del Torro, but I really would have preferred bypassing the transaction fees and just kept 100 dollars or so from the US in anticipation of this excursion. 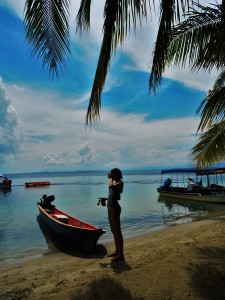 2) Beach time is free time: Being a part of a tour group means that activities are scheduled for a certain time slot, so that everyone can arrive and leave together. In Panama, our only scheduled activities were eating breakfast together and taking a boat to a snorkeling spot (once) and going to the beach (twice). The good news is that on the beach, time is all yours! You can do whatever you want...except for leave. Be prepared for long hours on the sand, in the surf, and under the sun by packing your sunscreen, sunglasses, bug spray (to repel sand flies and any bugs you may encounter hiking through the jungle), a towel, a camera, money, water bottles, and snacks or a lunch. Also, don't forget extra items to pass the time like a book, a journal, a Frisbee or volleyball, etc.

Starfish beach had only a thin coastline, but there were quite a few food shacks to choose from for lunch ranging from fresh seafood to fruit smoothies. However, there were only about two restaurants at Red Frog Beach, but the larger waves kept most people entertained for our entire stay. 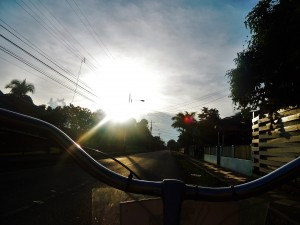 3) Explore the town: Though it may feel like most of the day was spent at the beach, there are still a few hours of sunlight to get to know Bocas del Toro. It's especially easy when the streets are quite bike-friendly! Several businesses rent bikes for as low as two dollars per hour, and being able to see the town in full is (not trying to be clichè, but...) priceless.
Seeing the daily lives of locals--their small, sometimes decrepit houses, the dogs that roam together with tongues lolling in the heat, children that play soccer in the streets, the mixed pieces of laundry hung up to dry on picket and wire fences--was eye-opening. Riding from around 5-6 PM, I got to see the colorful sunset behind the equally colorful houses, an early full moon hanging like an orb in the sky, locals playing a late afternoon game of dominoes, and several other neighborhood get-togethers distinguishable by booming, bass-heavy music resonating from within houses and excited conversations. There's so much to see, and a bike helped me explore more than most tourists usually do. It was one of my favorite experiences from the trip. 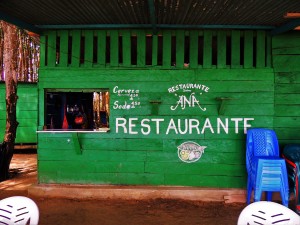 4) Finding food is usually easy: Compared to Costa Rica, food is fairly cheap in Panama. I took advantage of the many grocery stores that lined the main street in Bocas del Toro and bought vegetables, fruits, and other snack items to eat for lunch while we were on the beach. Then, when we returned in the afternoon, I got a chance to try some of the restaurants in our area. This was important, since nearly all of them sounded like they had delicious food. 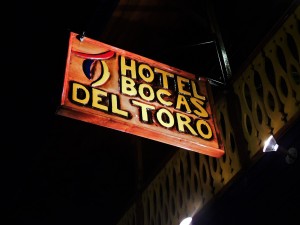 "Hotel Bocas del Toro" was also a restaurant and had a quiet, candlelit balcony that was free of people when my friend and I went to eat our first night in Panama. The food was inexpensive, very delicious, and there was a good amount of options. My grilled veggie sandwich was warm, gooey, and delicious on foccacia bread, my friend's five dollar ceviche with crackers was a nice, light, late-night meal, our shared 1500 mL water bottle made a good, reusable bottle, and there was no problem with splitting the check at the end. 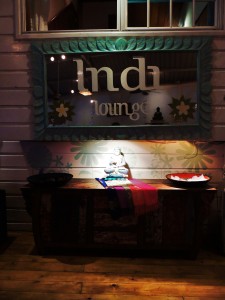 "Indi Bocas" was a gorgeous, open-concept restaurant with casual seating of Adirondack chairs, white, wooden furniture with colorful cushions, and, as is traditional in the Indian culture, a large, low table with pillows around it to sit on. The menu ranged from wallet-friendly, fresh fish for nine dollars (and it came with a decadent sauce of your choice, rice or potatoes, and broccoli topped with sliced almonds) to more expensive, larger plates of lobster or Indian foods with a slightly Caribbean twist. The atmosphere was calm, and the waiter was respectful, too. The only problem was that they refused to split our check, and it took a few minutes of forcefully saying we needed to split the check for the cashier to dutifully do the math by hand and charge each of our cards separately. 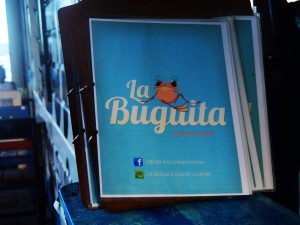 "La Buguita" was a fun, little place for a late lunch. Located on a dock, it was colorfully painted and played reggae beats to get you into that laid-back island feeling. When my friend and I stopped in, we were greeted by several people (customers and personnel) who made us feel very welcome. Everybody in the restaurant smiled which was very different than our past encounters with restaurant workers in Panama. Though the menu wasn't extensive and had separate small menus for different times in the day (though they probably would have been willing to make us breakfast food at four o'clock if we had asked), what they did offer was creative, fresh, and sounded delicious. My three mini lentil burgers served with freshly cut potato wedges dusted in herbs and spices were absolutely delicious and looked gourmet (that is to say, looked like they should cost more than 8 dollars), and my friend's fish taco's were, quote on quote, "the best fish tacos [she'd] ever had." 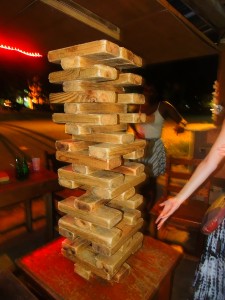 "The Bookstore Bar" was a unique place to visit at night. It did, in fact, sell used books, but it also had a giant jenga set and ping-pong table. Gelato was sold upstairs, but was a little expensive at 2 dollars for one scoop and 50 cents for a topping, but you've got to treat yourself sometimes, right? And the desert was delicious, the balcony seating was beautiful, and, of course, stacking jenga pieces thicker than your arm was cool too.
Bocas del Toro may only have been a small piece of Panama, but it made me want to return again to see even more! For now though, I'm happy to have San Josè, Costa Rica as my (temporary) home.
Gabriella Cisneros is the Fall 2015 CEA MOJO in San José, Costa Rica. She is currently a sophomore film student at UW-Milwaukee.
Read more about our CEA Content Creators.
Leave a comment
Newest on top Oldest on top
Load more comments
Thank you for the comment! Your comment must be approved first