March 31, 2015
by CEA Content Creator
SHARE SHARE
Hola amigos! One of the universal challenges of moving to a new city to study abroad is learning the layout of streets and navigating public transportation. This can be compounded when you don't speak the local language as a native speaker. Luckily, Buenos Aires is a fairly cheap and easy city to move around in, and it doesn't take long to get the feel for a commuting routine.

The most ubiquitous and convenient feature of Buenos Aires public transportation is the bus system, known colloquially as 'bondis' or 'colectivos.' They maintain a commanding presence on the main avenues, rumbling by in bustling fleets, the sounds of their squeaking brakes and hearty acceleration comprising a significant portion of the urban traffic symphonics. If you can figure out the right path, the complex nexus of buses can get you anywhere in the city for 3-3.50 pesos (less than 30 cents per ride). Their routes are organized through different number and color codes, which are easy to spot. 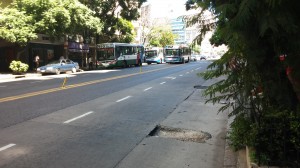 Your 'sube' card is indispensable in this endeavor. It's a blue card that you can charge with cash at many street-side kiosks to use on the buses and subways. When you get on a bus, all you have to do is hold your sube card up to a sensor and tell the driver your destination, and he'll deduct the appropriate amount. A 'Guia T' is also a necessary tool - it's a little map booklet that displays the city in grids, with corresponding squares of street names and bus routes. There's no strict schedule for the buses - just wait at a stop ('parada') for your bus number and it's rare that it would take more than ten minutes for one to roll by.

If you need to get a bit farther a bit faster, the subway system is a good bet. In Buenos Aires it's known as the 'subte' (short for 'subterraneo', not to be confused with the 'sube' card). Most of the lines run east-west, and the blue line is the main connector between, running north-south from Retiro to Constitución. Charging on your sube card, a subway ride costs little more than a bus. Be prepared for close quarters without AC once you get down below, but if you view a crowded subway ride as part of submersion into the vast veins of the macro-organism that is Buenos Aires, it can be an invigorating test of your comfort zone. Street musicians, beggars, and salesman are also a common sight down in the underground, though they are generally harmless. It always is good to keep a close hand and eye on your belongings though, as BA is a bustling city which, like any other, is home to its fair share of petty crime.

If you're in the mood for a quick jaunt, want a safer option at night, or have a few dollars to spare, a taxi is your best bet. If you can, look for the 'Radiotaxi' signs atop cabs, as that is the most reputable service. If you have a decent accent in spanish and exude a nonchalant air, you're not likely to run into any cabby trying to be tricky. Almost all of the cabbies I have ridden with have been friendly and welcoming, and a fare hardly ever ends up costing more than 6 or 7 dollars.


There's so much to see in Buenos Aires that learning the ropes of the transportation is a definite must. It's nothing to be anxious about, and after just a few days you'll start to feel like you're traveling like a local!

Maximilian Mohr is the Spring 2015 CEA MOJO in Buenos Aires, Argentina. He is currently a junior at the College of William & Mary.