Knocked Out in Translation

October 12, 2014
by CEA MOJO
SHARE SHARE
Armed with only a month of Spanish training and 16 lessons of Pimsleur’s teachings under my belt, I went deep into Chilean territory. Audacious, borderline cocky, I thought Spanish would be a simple pickup. The fight did not last long; I was immediately knocked out by a punch packed with completos, mayos, avocados, and Pinochet. “Chilean Spanish is so different, that it’s not even Spanish,” said one of my friends from Mexico. I adhered to her advice half-heartedly: the result, a blowout.

It is rapid, heavily slurred and creatively shortened. Listening to Chilean conversations is like listening to the rapper Twister on fast-forward mode.  When other international students from Spain, Mexico, Colombia, Honduras and Peru are having hard time adjusting to Chilean Spanish, imagine what a rookie like me felt (for a comparison, try speaking with locals in Scotland with all of their slang and accents!).

There are numerous phrases and words in Chile, which are specific to this country. I will share three most common Chilean words I’ve heard so far: cachai, bakan, pololo/a.

Cachai can be heard everywhere in streets, cafes, buses/metros, and classes. Cachai is derived from an English phrase, “did you catch that?” It means, "did you understand?" It also adds to the distinct Chilean flavor by adding of  ‘ai’ sound at the end. Chileans love to use ‘ai’ and is frequently used in colloquial settings (ex. como estas => como estai).

Another word bakan is a uniquely Chilean word for ultra cool.


My favorite words, pololo/a, refer to casual boyfriend/girlfriend. Usually it would be novio/a but in Chile, using that term means you are in a SERIOUS relationship planning to get married to your significant other.

Curiosity led me to discover why Chilean Spanish seemed so different from the rest, I came across an interesting aspect of Spanish and Chile.  Spanish is spoken in various regions across the globe and each country has its own distinct accent that characterizes its culture. Chile in particular is extremely different from others due to its geographical shape and location. 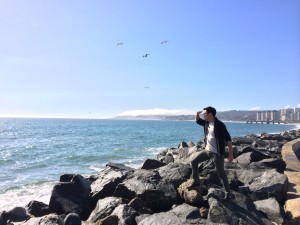 Chile is a prime example of an elongated nation. It boasts about 4300kms of coastline from north to south containing vast areas of different climates and landscape.  To the north you have the amazing Atacama Desert, to the south you have the beautiful Patagonia/Antarctica, the east is the Andes Mountain and to the west is the freezing cold Pacific Ocean. Two-thirds of the population lives in and around Santiago. This leaves Chile isolated, like an island on land. Chile’s isolation naturally caused Chileans to develop their unique style of Spanish.

With my remaining time, I want to travel to all these places to see how much of an Island Chile really is.  Gotta Cachai’em all!

Alex Chung is the Fall 2014 CEA MOJO in Viña Del Mar, Chile. He is currently a Senior at the University of Michigan.