Thanksgiving Abroad: A Different Kind of Day in Aix-en-Provence

December 03, 2013
by CEA Content Creator
SHARE SHARE
All of the American students - at least those that I’ve encountered - have come to realize that many of the customary American traditions and holidays simply do not exist in France. This includes Thanksgiving. Yes, it’s true. Time and energy were put, not towards preparing a grand meal consisting of turkey, stuffing and gravy- but setting up Christmas decorations (refer to my post about Aix’s best hidden treasure).
However, before your heart sinks at the thought of not being able to stuff yourself beyond belief, allow me a moment to share this disclaimer: my first Thanksgiving in France was by far one of the most memorable and fun Thanksgivings to date. Perhaps the coolest part was that this Thanksgiving was two part, with the first half being spent in France with my peers, while the second was in Germany with family. 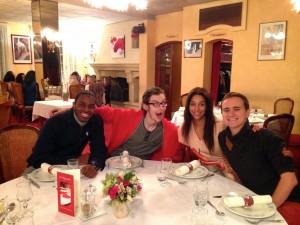 The dinner in France was held the Wednesday before Thanksgiving at an incredible restaurant called “...”. After taking a fifteen minute bus ride as a group, we arrived to find that the entire place was reserved just for CEA students, past and present, and the French host families. It was absolutely charming!
The night began with drinks and appetizers. This was great because everyone then had a chance to mingle with friends they hadn’t seen in awhile (one fraction of the students attend the American University, while the rest attend an international school), or meet new people. Some students even brought friends who had traveled all the way from the U.S. to spend the holidays with them. 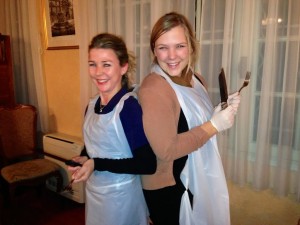 Following the meet and greet there was a Turkey carving contest. Both male and female students volunteered to participate, as well as one of our program directors, Sandra. The women dominated the competition! Check out some of the footage below. 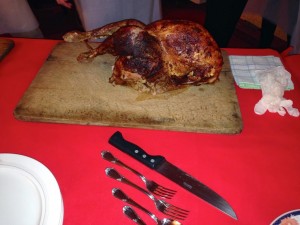 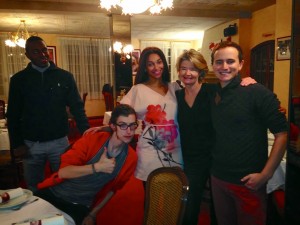 The next part was the best. Time to eat! Although Thanksgiving isn’t a part of normal French tradition(s), one wouldn’t be able to tell simply by looking at or tasting the food. The restaurant provided tender turkey, dressing, homemade gravy, green beans, sweet potatoes, mashed potatoes and cranberry sauce. Needless to say, they pulled out all of the stops. For dessert there was a pumpkin pie. (Now, I have never been the biggest fan of pumpkin flavored anything; however, even I had to admit that the one bite I decided to take of my little triangle piece wasn’t so bad.) But, as is typical of French tradition, we were supplied nonstop with red wine, which accompanied each flavor splendidly. 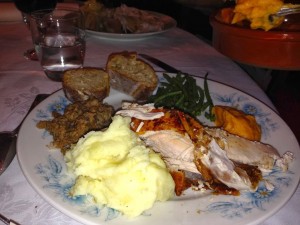 I was content, thinking that, with happy hearts and full stomachs, my first Thanksgiving away from home was highly successful. Little did I know that the fun had only just begun! While everyone was dividing my slice of pie among the table, my friend Lauren then approached me with a proposal: sing for our incredible program director, Vivienne. How could I say no? So, nervously, I walked to the front of the room and successfully performed a rendition of SWV’s “Weak”.
And this was just the first half of the holiday.
The next day (on actual Thanksgiving), I awoke early to catch a flight to Germany. Lucky me, I was invited to spend the holiday with my older brother who plays basketball for the Phoenix Hagen Basketball team. There was a team Thanksgiving dinner and gathering hosted in a gorgeous, old style hotel. Dinner was served in the large ballroom that beautifully decorated. There were candles to add to the already low, warm lighting, tinsel hanging in each corner, beautiful table cloths, and even napkins decorated with Christmas trees. (Mrs. Claus would’ve been proud.) And dinner did not disappoint in any way and included the traditional foods, similar to the CEA dinner, with extra editions like corn, ribs and apple turnover. 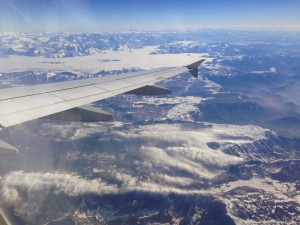 Needless to say, the holiday was fantastic. Spending time with both family and friends; what more could one ask for?
Kara Henderson is Fall 2013 CEA MOJO in Aix-en-Provence, France. She is currently a junior at the University of Pittsburgh.
Read more about our CEA Content Creators.
Leave a comment
Newest on top Oldest on top
Load more comments
Thank you for the comment! Your comment must be approved first