A Volunteer Experience in Rome 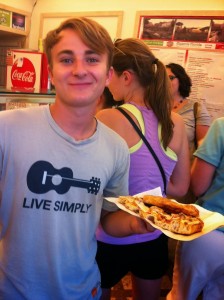 In many ways, my life, the lives of fellow members of Generation Y, and those of all Americans today are inexorably tied to the country of Afghanistan.  How could they not be?  The single most significant day in recent American history, September 11, 2001 is part and parcel with America’s following engagement in Afghanistan.  I have heard much about Afghanistan for the past 12 years, but always from a distance.
Tonight, outside Ostiense Train Station in the ancient city of Rome, in the Mediterranean country of Italy, I met an Afghan for the first time. Working at Marconi Ostiense, a food kitchen that dispenses much needed nourishment to those of Rome that cannot feed themselves, I had the privilege to engage in a compelling discussion about life.
As I stood outside of Section 1, running “security,” I began to speak with Ahmed, a man who appeared to be in his early-to-mid thirties, and whom I discovered has lived in Rome for the past three years. We talked candidly about his experiences in Rome.  Our discussion led to a difficult moment in which I had to reconcile my view of Rome—colored by the bubble within which a study abroad in Rome student lives—with his.  I live with my American roommates, attend American schools, and often frequent American hangouts.  Ahmed, conversely, is jaded by a Rome mired in the depths of a Eurozone crisis, unable to provide him with gainful employment, with housing, with regular sustenance—the elemental necessities of all human life.
This fundamental difference in our stations of life, however, was transcended by the goodwill which he felt for me and I returned to him. Due to his impressive command of the English language, we were able to understand each other’s human condition.  He asked me about my studies, where I come from and what my purpose in Rome is; I asked Ahmed what Afghan people think of Americans.  He replied, “I love Americans, Afghans love Americans, we only do not like American government.” From this response I took away something that I have always believed: people inherently love one another.  It reaffirmed my conviction in being there.
In my second trip to Ostiense I put a personal face not only to Afghanistan—which to me has forever been a nebulous land plagued by eternal conflict—but also to the homeless of Rome, who are very real and very concrete.
— Steven Lauricella
University of San Diego - CEA Rome, Fall 2013
Read more about our CEA MOJO Bloggers & Photographers.
Leave a comment
Newest on top Oldest on top
Load more comments
Thank you for the comment! Your comment must be approved first