October 28, 2013
by CEA Content Creator
SHARE SHARE
Last Friday CEA took us on a great trip to Bologna, which is in the largest and capital city of the Emilia-Romagna region (that’s in northern Italy, in case you haven’t memorized the regions like I was supposed to). The only thing I knew about Bologna was that it is renowned for its food, and that’s exactly what I was excited for. I was tired of accidental hikes (in Cinque Terre) and walking miles and miles on every other trip. So I was determined to take it easy and enjoy my time. And it was perfect for that!
Our bus ride from Florence early Friday morning was an hour long. I loved that everyone on the bus started out talking and by the end everyone was napping. We stopped at a gas station to grab a coffee and use the bathroom before getting into the heart of the city. I was so surprised what a city it was! Much more metropolitan and modern than Florence. But it still had those ancient features that are the staple of Italian cities. We walked to Piazza Nettuno, which is connected to Piazza Maggiore as the center of the city. We were divided into groups for walking tours, which lasted a couple hours and were very interesting. 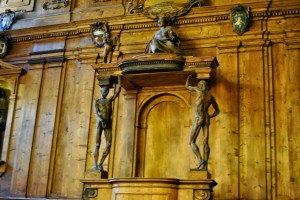 My favorite site was the Archiginnasio of Bologna, part of the University of Bologna, which was founded in 1088 - the oldest university in the world. In the Archiginnasio we went into the Anatomical Theatre, which is where they would study anatomy by doing human and animal dissections. The room was cool, and the story of how they studied was even cooler. The tour guide said that students could only study during the coldest months of January and February to keep the bodies from decaying. Because they had so little time, they would be in there for 14 hours at a time, beginning at 4 a.m. To keep the students from falling asleep, the benches where they would sit were extremely uncomfortable (I sat there, and I can definitely attest to that). I really liked the statues they had next to the teacher's seat, which were “skinless,” anatomically correct bodies so the teacher could point things out. Those are definitely unique statues. 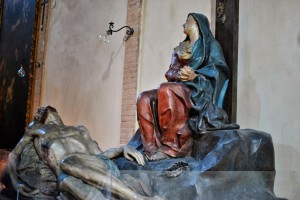 After the Archiginnasio, we visited the Basilica di Santo Stefano. It is actually four connected churches, dating back to the 5thcentury. Inside the first church we saw this amazing sculpture of a pieta scene. The interesting part about this statue is it was made out of paper mache from playing cards confiscated when gambling was prohibited. In the next church we saw a replica of the Holy Sepulchre in Jerusalem where Christ was buried. That was really incredible to see. 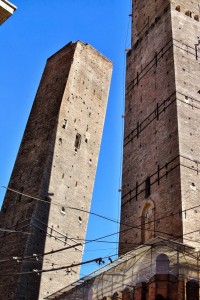 When the tour was over it was finally time to eat! We were so hungry and excited to try to specialties of Bologna that we’d heard so much about. First we had pasta bolognese. I thought that was just another way of saying meat sauce, but it is very different from what I make at home. There was no tomato or tomato sauce involved! Just ground meat and a certain blend of vegetables and spices. Delicious! The next course was an assortment of cheeses and meats. I’ve been studying cheeses in my Food & Wine class, and my professor was on the trip with us, so it was great to learn about these cheeses as well. There aren’t just different types of cheeses, but the ages of the cheese also makes them totally different. I definitely preferred the fresher pecorino over the older one. And for meats we tried the classic prosciutto, salame, and the mortadella that Bologna seems to be obsessed with. I’d never tasted it before, but when I did I realized that it tasted like… bologna. As in

“Oscar Meyer has a way with…” and that’s when I had that lightbulb moment. At the end of the tour we saw some of the tours that are scattered throughout the city. There was even a leaning tower of Bologna! Why isn’t it as famous as the other one? And you could even climb to the top for a view of the city if you wanted.

After lunch I went shopping – well, window shopping – at the countless designer stores lining the streets. Gucci, Prada, Fendi, Cartier, Armani, Louis Vuitton, Bulgari, Tiffany’s, just to name a few. They finally had to drag me away from the shops to take me back to Florence at the end of the day. What a great trip!


Samantha Wood is the Fall 2013 CEA MOJO in Florence, Italy. She is currently a junior at Salve Regina University.