October 21, 2013
by CEA Content Creator
SHARE SHARE
October 16, 2013 is a day that Joe Day (’15) will never forget. The PC in Rome Program attended the weekly Papal Audience with Pope Francis. We were thrilled when “Providence College” was officially welcomed over the loud speakers in the list of English-speaking pilgrim groups. But we never imagined what would come during the Pope’s drive around the Square.

Our student, Joe Day, brought a zucchetto for Pope Francis (the white skull cap he wears). Inside the hat was a note saying “Providence College loves Pope Francis”. The Pope put it on his head and said “It’s too big!” Then he handed the hat back to Joe. This gesture of “exchanging hats” has become popular at the Papal Audience. So, Joe Day decided he’d like to try it. And since we were sitting on the aisle it worked! 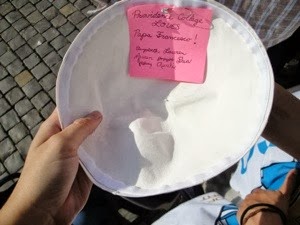 Here’s how Joe described the experience:

“It is a tradition in the Church that some pilgrims bring a white zucchetto (skull cap) to present to the Pope at his audiences. The Pope either exchanges zucchetti or places the pilgrim’s on his head for a
moment before returning it. I had heard of this custom shortly before leaving for Rome and have had the opportunity to see it performed several times. It used to be the case that the Pope would only exchange zucchetti in private audiences. Swaps during general audiences weren’t all that common under Benedict XVI and John Paul II, probably in part due to the use of an enclosed, bulletproof Popemobile which was used after the assassination attempt on John Paul II.

Pope Francis does not use the bulletproof Popemobile, making him more accessible to the crowds. Because of this I mentioned to some other PC students my idea of getting a zucchetto for Papa Francesco. On Wednesday morning we arrived at St. Peter’s at 6:00AM and waited in line until the square opened at 7:30. We had scoped out some prime real estate in the front right section of seating by the central pathway leading from the Obelisk to the steps of the Basilica. What we didn’t know was that the Swiss Guards were going to line that pathway with those in wheelchairs. This acted to our advantage.

Around 9:50 Pope Francis entered the Square and drove around it, kissing babies, smiling, and waving. Near the end, he came down the pathway in front of us. We were all ecstatic with the excitement of being so close to our Papa. We all leaned over the barricade as he slowing (because of the wheelchairs) drove towards us. To be honest, I can’t really remember what happened next. It was all such a blur filled with so much emotion, so much joy. But according to what everyone else remembers this is what happened:

I stood on my chair reaching as far as I could with the zucchetto as I yelled, “Papa, Papa!” As he approached us he signaled for the driver to stop. Smiling at us he reached out, taking the zucchetto from me and brushing my hand. Still smiling he looked down at it and the note we had placed in it, which read “Providence College Loves Papa Francesco” with our names signed beneath it. Looking up at us he said, “Providence College” and then, always smiling” measured our zucchetto and his. With his characteristic simplicity, he said in Italian, “Its too big.” He then placed the zucchetto on his head for a moment, closed his eyes and said a prayer before handing it back to us with a smile and wave! Words cannot describe what it was like to be so close to the successor of St. Peter, to touch his hand, to have him speak to me, to have him take and wear that zucchetto for a moment before returning it as a gift, blessed for us. My hands didn’t stop shaking for hours! I spent the rest of the audience in a dazed state of joy, cradling the zucchetto in my lap. It was a blessing and a gift, a grace that will remain with me always: my moment with the Pope!”


Dr. Aurelie Hagstrom is currently serving as the Providence College Faculty Resident Director for the Providence College & Center for Theology & Religious Studies. You can find the original version of her 'Hats Off to Joe Day' blog post here: http://blogs.providence.edu/rome/2013/10/18/hats-off-to-joe-day/
Read more about our CEA Content Creators.
Leave a comment
Newest on top Oldest on top
Load more comments
Thank you for the comment! Your comment must be approved first