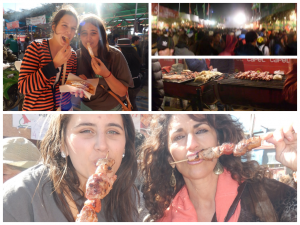 A mere 75 days after I had gazed upon fireworks lighting up the Galveston, Texas Bay in celebration of America declaring its independence from Great Britain, I received a completely different take on what independence celebrations encompass around the world and this time fireworks were not involved!

On September 18th or “dieciocho”, Chile celebrates its Independence Day known as “Fiestas Patrias”. This celebration commemorates the beginning of Chile’s freedom from Spain. Fiestas Patrias is a week-long celebration that includes a lot of Chilean food, drinking, dancing, flag waving and a week long break away from school!

Most of the celebrations are held in fondas or ramadas, open sites with food vendors, games, and amusement rides. Fondas are what I would call your typical fair ground in the states. Fondas normally operate for 5 days throughout the week of September 18th. I spent this week down south in Pucon, a small touristy town located in the lake district of Chile. During this week, there was practically no Chilean vendor that didn’t offer a good selection of different meats, a tasty empanada, and glasses of chicha, a Chilean wine specialty. 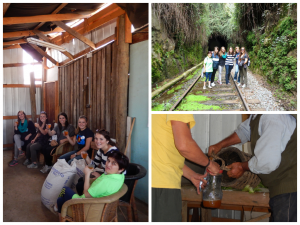 In Chile there are two main types of chicha: (1) apple chicha, which is produced in southern Chile and (2) grape chicha, which is produced in central Chile.  The week before dieciocho, our  CEA program director took us on a private tour of a small chicha producer in Quillota, Chile. He explained to us that the grape juice is heated for several hours at a low temperature and once cooled, sealed into tinajas, large ceramic jars, for fermentation. Our samples were harvested in summer but he explained that chicha only improves with time; I was actually the one to ask about this because I really wanted to take a bottle home to my family and was worried about the bottle not being sealed… turns out the farmer wouldn’t sell me a bottle because he exclusively produced it for his family and not for profit! I was slightly disappointed but finding a bottle during the week of Fiestas Patrias is not a daunting task, just go to ANY fonda located throughout the entire country of Chile! 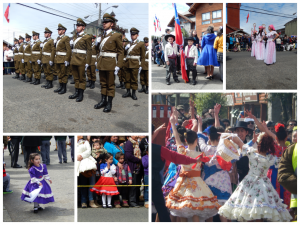 Overall it was a wonderful week in a beautiful country filled with a tremendous amount of culture and an extreme amount of Chilean pride! There were countless cueca, the national dance, competitions, numerous parades, and a number of Chilean huaso rodeos. This was defiantly an experience that I will never forget.

¡Salud! from your 2013 Vina del Mar, Chile MOJO, Danielle Banks Read more about our CEA Content Creators.
Leave a comment
Newest on top Oldest on top
Load more comments
Thank you for the comment! Your comment must be approved first