October 30, 2008
by CEA Content Creator
SHARE SHARE
October 25th arrived, and it was time for the Alicante group to prepare for our first overnight excursion. We had to get up early in the morning in order to get to see all the things we have planned to visit during our stay in Madrid, the capital city of Spain. We left Alicante on the train, for about a 3 hours and 45 minute ride. As we were leaving the city behind, some of the people in our group took a little nap while others stayed awake looking out the window observing how the landscape slowly changed, transforming from the Mediterranean to the Castilian flat landscape. It was then when Don Quixote came to mind... I tried to imagine for minute this Spanish Medieval knight fighting windmills, thinking they were giants he had to slay. After a nice ride, we got to Atocha train station, an amazing Modernist building surrounded by beautiful architecture. We were already starting to feel the flavor of a big city: movement and noise everywhere. We headed off to our hotel and checked in. The hotel was just 5 minute walking from The Plaza Mayor and Puerta del Sol, two of the most well-known places in the city. The first thing we visited on Saturday afternoon was the Prado Museum, one of the most famous Arts Galleries in all of Europe. We spent a few hours admiring some of the major works by Goya, artists from the Italian School such as Tizziano, and many other major works of art that are exhibited there. After our visit to the museum, we toured the city center. This was my favorite part of the day. We walk through the streets until we spotted the Cibeles Fountain, where we learned that when the Real Madrid Soccer Team wins big games, all supporters and players celebrate by jumping in the fountain. 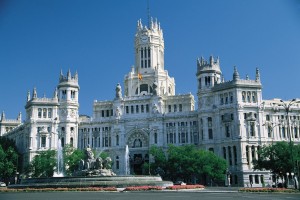 We continued our tour, stopping at the glamorous Hotel Ritz, the House of America that now holds a Post Office, the Royal Palace, Plaza Mayor and Puerta del Sol. On Sunday morning we got to experience the traditional Spanish flea market, known as El Rastro. It was unbelievable! It was great experience to feel like a real Madrileño while shopping and walking around the Rastro. I loved the “calle Rivera de Curtidores”. There is such a variety of stands, selling everything from clothing to antiques, plus all kinds of souvenirs for the students to get for friends back home. After our time at El Rastro, we went back to the hotel and we met Noel and Kate, wearing belly dancing dresses. It was so much fun! Our last stop on the trip was a visit to El Retiro, the most important park in the city. While some of us were exploring the park, others were just chilling out on the grass and enjoying the company of other CEA students. After an awesome experience, we headed back to the train station to get an early evening train back to Alicante. We had a really good time talking about the places we had just visit. Before dinner we were playing riddles and “I pogo of…” By the way, if you want to learn how to pogo of…” you will need to come and study abroad with CEA in Alicante to be taught… :) This was an intense and fun weekend. I will never forget having the opportunity to visit Madrid, one of the cities that I had always wanted to see in Spain. I am so looking forward to going on the next excursion! Read more about our CEA Content Creators.
Leave a comment
Newest on top Oldest on top
Load more comments
Thank you for the comment! Your comment must be approved first